Using the Identify and Interpret Strategy with Data Points

I find that getting students excited about biology and engaging them in the practices of science can be challenging with certain topics. For example, with mitosis and the cell cycle, students encounter complex mechanisms described by such a lengthy list of terms that it can become discouraging and rather dull for them. As instructors, we can do a lot to motivate students by relating the content to their lives and engaging them in scientific practices that model real scientific work.

Students’ interest in cancer motivates them to invest in studying mitosis and the cell cycle. HHMI BioInteractive provides resources that make the study of these topics exciting and intellectually challenging. For example, Data Points is a series of resources that each feature a graph or figure from a scientific journal article for students to interpret and discuss. Graph interpretation is among the essential quantitative reasoning skills required not only for biology majors but for all students, in order to function effectively in a democratic society. I use Data Points following a brief period of lecture to provide a short activity that promotes student reasoning and discussion, giving students the opportunity to think like biologists (Miller, et al., 2008; Tanner, 2009). Research in education and psychology shows that instruction that actively engages students with the content and practices of science is more effective in promoting learning (Handelsman, et al., 2004; Miller, et al., 2008).

One such resource, the Role of p53 in the Cell Cycle, fosters student engagement and quantitative reasoning, as well as highlighting the importance of p53 in cell cycle regulation and cancer. The protein p53, known as the “guardian of the genome,” controls transcription of a number of other genes that stop the cell cycle at the G1 and G2 checkpoints and can activate DNA repair mechanisms or trigger apoptosis. Normally functioning p53 proteins serve to prevent the development of tumors, and mutations in the p53 gene are the most common gene-level changes found in human tumors (Hollstein, et al., 1991). 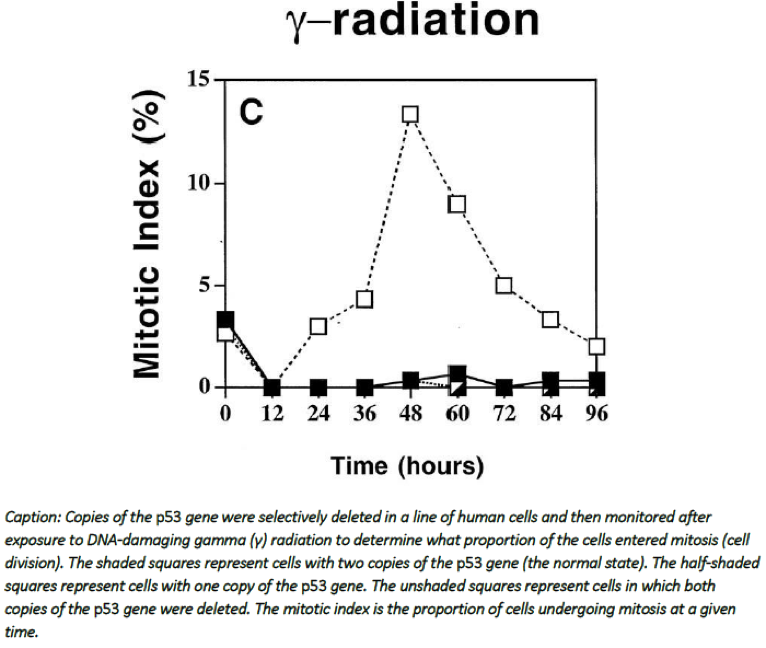 The Role of p53 in the Cell Cycle is a one-page resource that presents students with the above graph and caption and provides necessary background information for interpreting it. When I use this resource in my classroom, my students work in groups of two or three and use the Identify and Interpret (I2) strategy (teacher documents can be found here) to guide them toward the production of a more detailed caption for the graph. Using I2, students first identify any patterns, changes, trends, or differences they see. They draw an arrow from each significant feature of the graph they identify, then write a What I See (WIS) statement describing the feature. After identifying all of the significant features of the graph, students interpret each feature, writing a What It Means (WIM) comment next to each WIS statement. For example, in the graph below, a student noted that the y-axis (dependent variable) plots the mitotic index, the percentage of total cells counted that are engaged in mitosis. My students previously observed onion root tip cells and calculated a mitotic index, so they understood that the mitotic index measures cell proliferation and that mitotic index varies with tissue type. 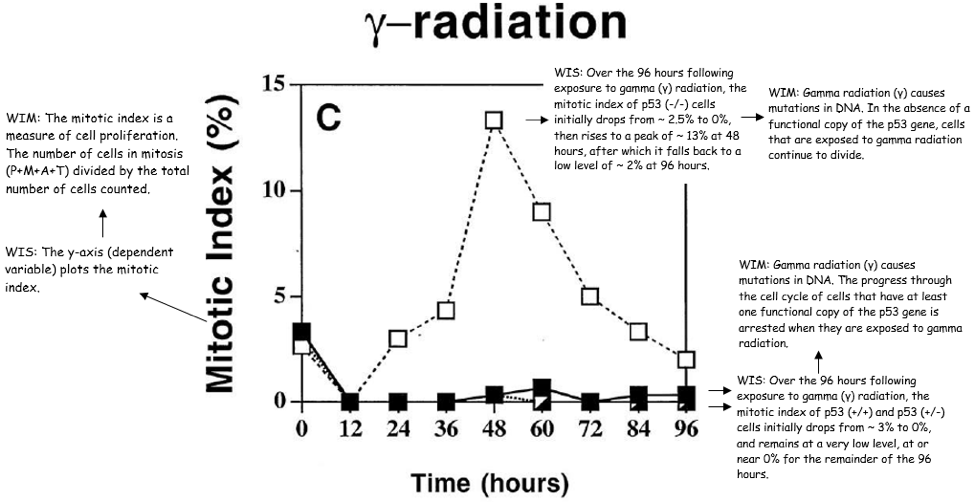 After students identify the relevant features and their meaning, we have a class discussion during which some students share what they’ve found and we come to some agreement on the relevant features and their meaning. Once the class has reached a consensus, students individually write a detailed caption for the graph by combining the WIS and WIM comments into a coherent paragraph. The I2 strategy scaffolds students’ efforts to understand graphs and other figures found in scientific papers and textbooks. In addition, when used with small group discussion, I2 fosters the kind of student talk that promotes learning of both content and scientific practices (Tanner, 2009). The educator’s guide to Role of p53 in the Cell Cycle also provides a link to an annotated version of the original paper containing the graph above, one of the many scientific papers on the AAAS Science in the Classroom website that have been annotated for use in the classroom.

If you use Data Points in your classes, or have questions about their implementation, tell us how! Join the conversation on our Facebook group about how to interpret complex figures.

Tanner, K. D. (2009). Talking to learn: Why biology students should be talking in classrooms and how to make it happen. CBE—Life Sciences Education, 8, 89–94.

Keri Shingleton explains how she uses the BioInteractive animation on cancer and cell fate to spark curiosity in her students and encourage exploration of a topic.

Mark Randa describes how he uses BioInteractive's cell cycle Click & Learn with his college students to introduce the topic of cell birth and death, explain how the cell cycle proceeds, and show how cancer results when key regulation steps break down.