Using statistics to analyze the data we generate from observations and experiments can be a daunting task for students — and for teachers. In my first eight years of teaching high school biology and chemistry, I had never had any practical training in data analysis, and I struggled with teaching these skills in the context of the biology curriculum. Yes, the struggle is real, but there is help!

The first version of the HHMI Mathematics and Statistics in Biology Guide (Stats Guide) was launched on August 12, 2014. Since then, the guide has provided explanations, examples, and ideas for how to bring statistics into the biology classroom for thousands of teachers. BioInteractive has also sponsored numerous statistics workshops — run by teachers for their teacher colleagues — at both regional and national science teacher meetings and conferences. These workshops have provided invaluable statistics professional development to more than 1,000 teachers over the last 3.5 years.

The Stats Guide is full of examples of data-based activities students can actually conduct. For example, like many science teachers, I begin the year with a nature of science unit. Here I not only pull from Part 1 of the Stats Guide, “Descriptive Statistics Used in Biology,” but I also have students perform an unpaired t-test with their data. The activity I use is described on page 15 of the Stats Guide.

In brief, students use a toothpick-breaking experiment to test the hypothesis that our dominant hands are better at precise movements than our nondominant hands. I guide my students to a method for testing this hypothesis that involves seeing how many seconds it takes to break 20 toothpicks with each hand (Figure 1). 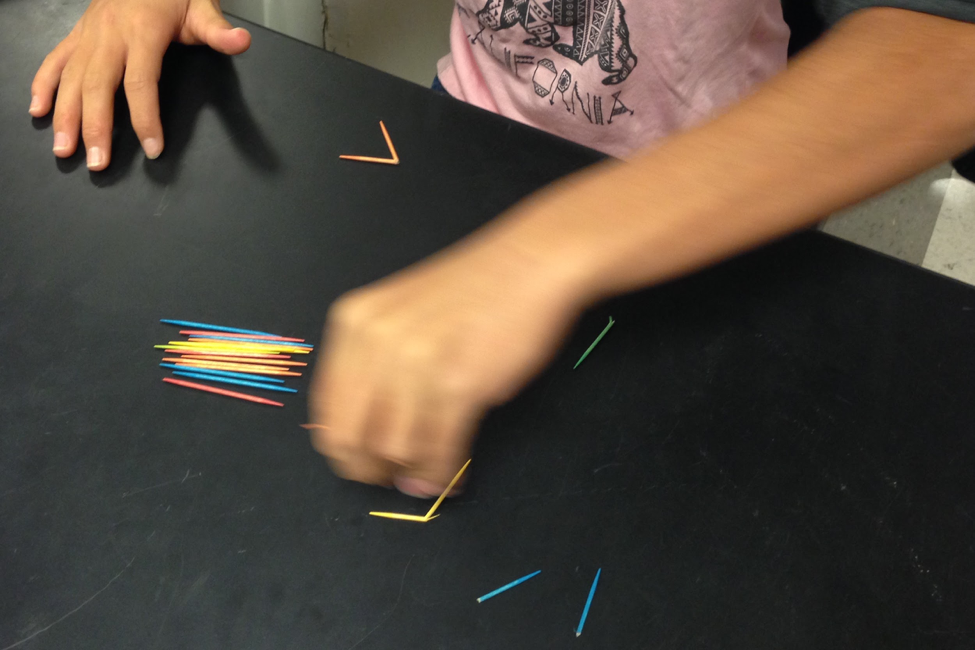 Figure 1. A student breaks 20 toothpicks with her nondominant hand as fast as possible while another student times the effort.

Students put on the classroom board the time in seconds it took to break 20 toothpicks with each of their hands. Once all the data are up, student table groups then follow the calculation steps provided as a handout of Table 7 on page 16 of the Stats Guide (Figure 2). When student groups have completed their calculations, we discuss how their sample means are in fact estimates of the population mean from which the sample was taken, in this case, first-year biology students.

We then discuss the concept of error bars and that error bars can be used to show the uncertainty of sample means in estimating population means. For their error bars, students use the 95% confidence interval (CI) or standard error of the mean (SEM; a 68% CI), and we discuss how these two uncertainty estimates should be interpreted (p. 13 of the Stats Guide). 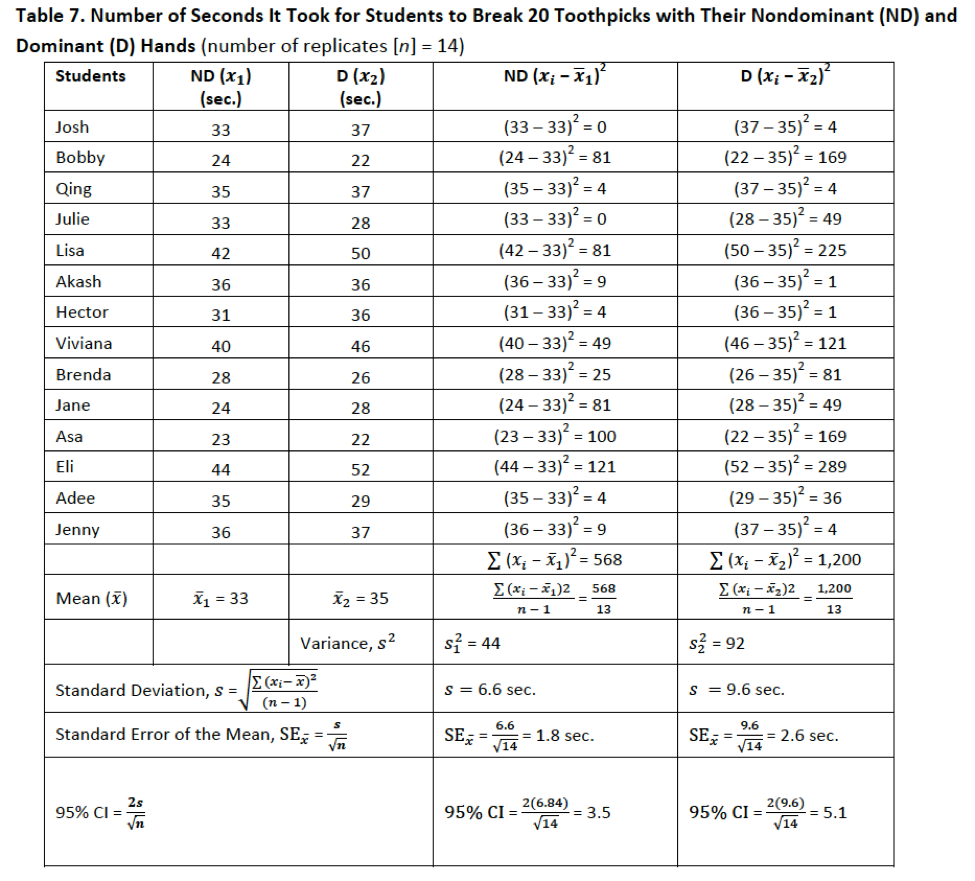 Figure 2. Table 7 from page 16 of the HHMI Mathematics and Statistics in Biology Guide. Students use this table as a guide for analyzing their own data from the toothpick-breaking activity.

This entire activity can be completed in a 90-minute block period or two 50-minute class days. This introduction to descriptive statistics and the t-test takes time because I have the students do all calculations by hand. Having students do the calculations manually helps them see exactly how each statistic is generated, and it helps them understand the logic behind each calculation step. Indeed, as this current year came to a close, and I read through my students’ lab notebooks one last time, I was thrilled to see data table after data table of descriptive statistics calculations (Figure 3)! 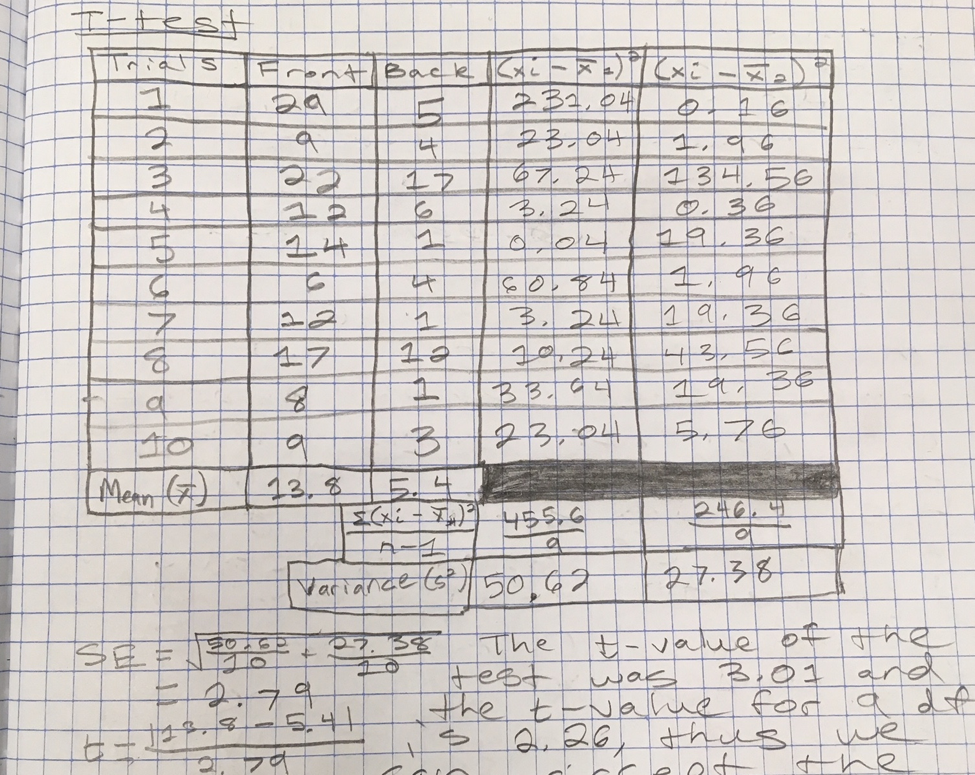 Figure 3. Image from a student’s lab notebook where the student used quadrat sampling to compare the dandelion density both at the front (southside) and back (northside) of our school building.

I choose the toothpick activity as the first activity in my curriculum because it is cheap and requires very little setup. However, the Stats Guide describes several other activities, from growing plants to watching goldfish eat brine shrimp, that can also be used to introduce students to data analysis and that are relevant to biology curriculum topics.

Later in that first year, I add the one-way analysis of variance (ANOVA) test to the students’ statistics toolbox. The ANOVA is not currently in the Stats Guide, but many teachers have requested for it to be included in a later edition. The ANOVA is also not typically taught in high school science courses; however, it is a natural extension of the t-test. Whereas the t-test compares the difference between two means (the signal) to the overall variance (the noise) of the measurements in two sample groups, the ANOVA is used when more than two means are being compared at once. The activity I use in my classes to introduce the ANOVA is run during our human physiology unit. Students use the ruler drop-and-catch method (Figure 4) to test the (student-generated) hypothesis that senses that are closer to the brain (sight and hearing) have faster reaction times than touch (on an arm, for example), which is farther from the brain. The ANOVA is used to tell the students if at least one of the mean reaction times is significantly different than the other two. 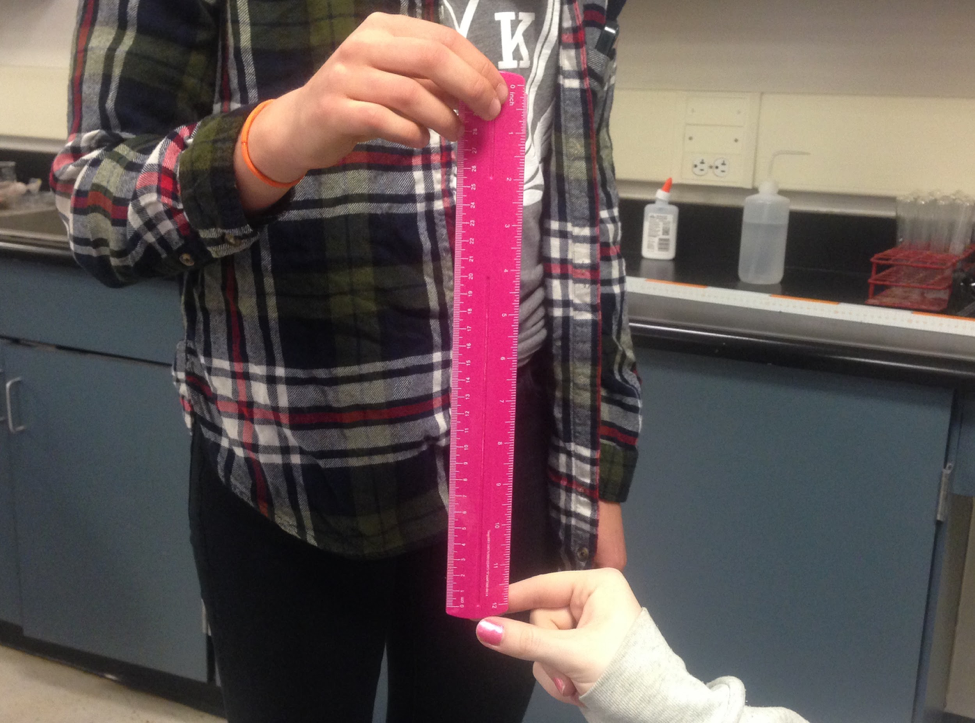 Regression analysis (p. 25 of the Stats Guide) is the next statistical tool my students learn. In my curriculum, students are introduced to regression analysis while learning the basics of evolutionary theory. Students look for a relationship between the length of sweet pepper fruits and the number of seeds in each fruit (Figure 5).

Many students coming into biology tend to want to “connect the dots” on every scatterplot they make, which can misrepresent what the data are showing. Using a trendline and regression analysis is a way to show uncertainty in the relationship between the two variables. Students doing the sweet pepper length and number of seeds investigation then come up with evolutionary explanations for the presence or absence of a statistically significant relationship. 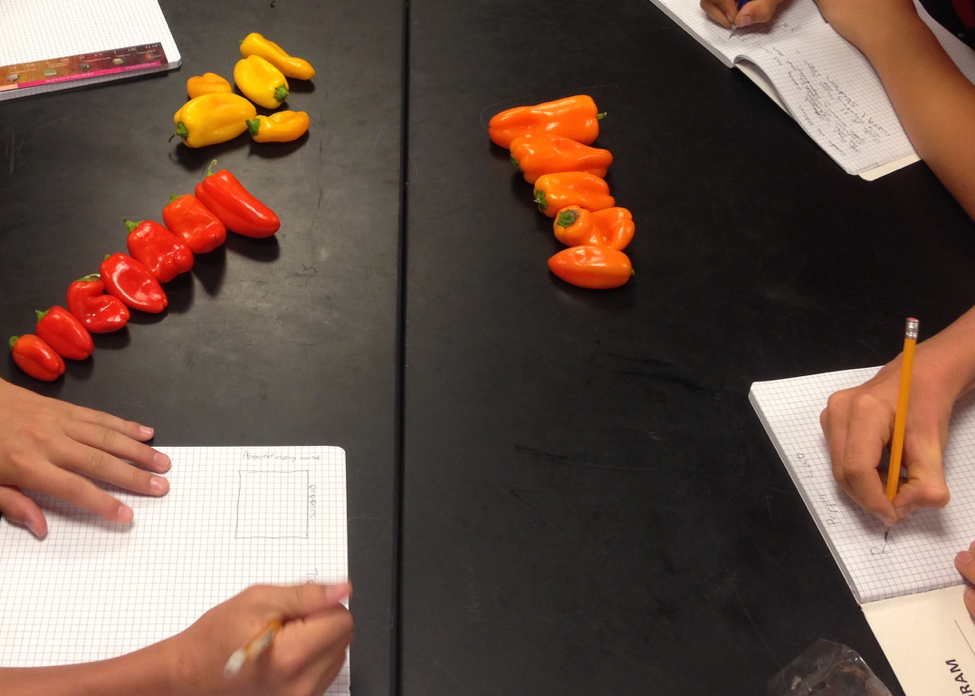 Figure 5. Students begin organizing themselves for measuring the lengths and number of seeds for individual sweet pepper fruits.

Regression analysis might be too complex for students in a first-year biology course, and the first example activity for regression analysis in the Stats Guide (p. 28) might work well in a second-year course, after students take chemistry. Here students perform a more sophisticated lab technique of assessing the relationship between pond water clarity and chlorophyll concentration.

The Chi-square Goodness of Fit Test is also described in the Stats Guide. It is likely the statistical test biology teachers are most familiar with, so I’ll just give it a brief mention here. While the chi-square test is traditionally taught during a genetics unit, it useful beyond genetics data. Thus, the first example in the Stats Guide (p. 21) shows how the chi-square test works with a simple coin flip probability exercise teachers can do with their students.

The lab example that follows comes from behavioral biology and describes students testing the hypothesis that pill bugs, which breathe using gills, require and thus prefer moist environments over dry ones. The chi-square test is then used to compare how well the observed distribution of pill bugs in the different habitats “fits” with what would be expected if they chose the habitats randomly.

Finally, one question teachers (and students) always ask is when to use which test. Figure 6 below is a flowchart to assist with statistics test decision making.

In summary, many of the activities in the HHMI Mathematics and Statistics in Biology Guide have helped me infuse statistics throughout my biology curriculum. With practice, analyzing their data after each activity becomes automatic for my students, and many even learn to enjoy it! 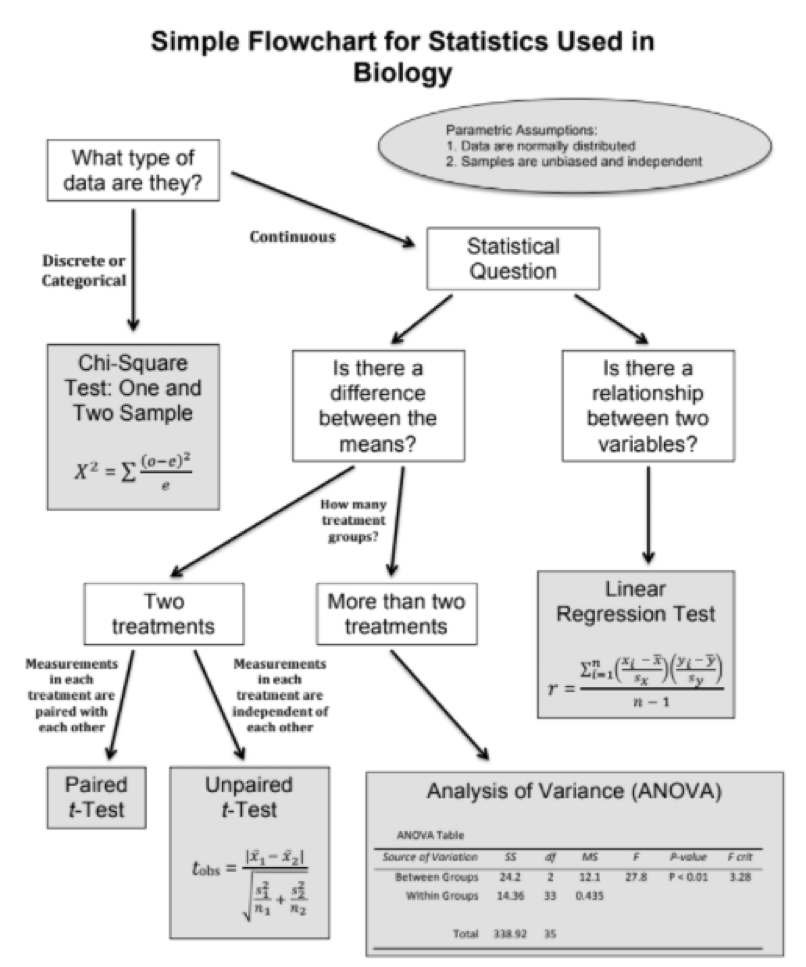 Figure 6. A flowchart to assist in deciding which statistical test is appropriate for different kinds of data.

Have questions about how to use statistics in your biology courses? Join the conversation at our Facebook group!

I teach at Fairview High School in Boulder, Colorado. I have been teaching since 1991, and I have been teaching statistics in my high school biology classes since finishing graduate school in 2004. In 2014, fellow biology teacher Ann Brokaw (Rocky River High School, Ohio) and I, in collaboration with the HHMI BioInteractive team, co-authored the HHMI Mathematics and Statistics in Biology Guide as a resource for teachers to bring statistics into their own biology courses. I am married to a high school Language Arts teacher, and we have a teenage daughter. I run, bike, swim, and blog as Mr. Dr. Science Teacher.

In this article, Mitchell Community College professor Parks Collins uses an argumentation framework that combines BioInteractive resources and a structured approach to addressing a controversial question: if viruses are alive.

Missy Holzer describes how she uses BioInteractive Data Points in the classroom to support her students learning to interpret data.