What do I want my students to learn and how are they going to demonstrate what they’ve learned? Formative, summative, formal, informal — oh my!

Prep time can be consumed with developing labs and learning activities that address content and learning targets we want our students to master, but we often fail to think about how we are going to assess what students really got out of this great science experience we have provided for them.

The process of crafting assessments that measure a student’s skill and knowledge has evolved dramatically over the course of my 35 years in science education, and I find I am constantly refining my skills in this area. I embrace the philosophy that assessment can be multidimensional; the expanding range of tools we have in our repertoire as science educators makes this possible. I am placing more emphasis on assessing rich, well-structured conceptual understanding than discrete knowledge.

In my classroom, students are active participants in the assessment process. I employ such strategies as I2, argumentation from evidence, and modeling to evaluate a rich understanding of a science process. Designing lessons based on authentic science and meaningful science processes that engage students allows me to weave a variety of assessment practices into the learning experience.

Optimally, the process of assessment is not a separate isolated piece at the end of the lesson but inherently built into the learning process. Phenomenon-based learning lends itself to this practice. By incorporating HHMI BioInteractive resources into my AP® Environmental Science class, I’ve found it easy to accomplish my assessment goals. I particularly like the suite of resources on trophic cascades that I use in my ecological relationships unit.

My students progress through a series of activities that allow for a variety of assessment strategies. I begin with the short film “Some Animals Are More Equal Than Others: Keystone Species and Trophic Cascades” and utilize some the questions from the accompanying film guide. The film portrays the work of Robert Paine as he developed his keystone species concept. It is an engaging story and serves as a great resource to start an informal discussion to assess students’ initial knowledge of the concept.

Prior to watching the film, I pose the following question to my students: “Are all members of a food web equal in abundance and in their relative effects on one another?” Drawing from prior knowledge and personal experiences, most students initially claim the statement is true but have only vague ideas to support their thinking. We revisit the question after the film, and they are excited to explain how their claim and reasoning have evolved.

At this point, students are able to define what a keystone species is and explain the important role they play in the coastal marine ecosystem where Paine did his work. I give them an exit ticket that simply requires them to put up or down arrows in the blanks. “When orcas started eating sea otters, the sea otter population ____, the urchin population _____, and the kelp population ____.” This is a great formative assessment strategy at this point in the lesson; I get immediate feedback on whether students get the big idea before we start to apply these concepts, and it is quick and easy for students to complete.

Students are then introduced to the concept of “bottom up” and “top down” forces that regulate the number of organisms at each trophic level, but are often unable connect this to the larger context of an intact, functioning ecosystem. Never fear, HHMI has modeling activities that allow students to develop the concept further. The Click & Learn “Exploring Trophic Cascades” and the card activity “Modeling Trophic Cascades” allow students to discover that these powerful indirect controls can be found in ecosystems around the globe. My students really like the action of working to construct their own cascade using the card activity. Each lab group models the food chain of a different habitat and indicates how each species affects the species in a trophic level below it. They move around the room from one habitat to another, explaining and justifying their model to other students — and to me!

They start to see patterns emerge: When the top predator is removed from a three-trophic-level system, there is a negative impact on the producers. But the opposite is true when modeling a four-trophic-level system. I can quickly assess whether they are getting the big picture and clear up any misconceptions before we move on. 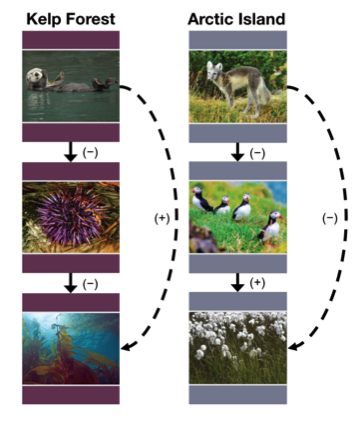 I follow this up with a more formal individual assessment in which students demonstrate that they can apply their understanding to interpretation of ecological data. Students study data found in the student handout for the short film, collected by ecologists Deborah Letourneau and Lee Dyer, who studied a tropical forest shrub called the piper plant and the various species of insects that live on and near the shrub.

Ants hollow out the branches of the piper plant and build colonies inside; the leaves of the plant are eaten by caterpillars. When ants encounter caterpillars or their eggs, they will eat them or kick them off. The researchers added beetles that eat the ants to determine the impact on the food chain. Is there a trophic cascade? Is one species more important than others? These are the questions my students will answer by deconstructing the data shown on the graph.

We begin as a group with the I2 method: Identify and Interpret. This technique gives students confidence that they can make meaning of the graph; without that skill they are not able to apply their knowledge of trophic cascades, the learning outcome I am really trying to assess. 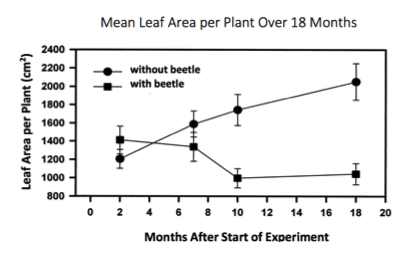 They draw two diagrams that show the food chains for both the experimental and control plots, and describe the effect of adding beetles on each species in the food chain. They can then write a statement of claim, provide evidence from the graph to support their claim, and explain their scientific reasoning. Here is an example of what that looks like in my classroom.

At this point, my students have constructed a deep understanding of the ecological processes involved in population regulation. They can use the rich vocabulary to communicate their ideas and apply that concept to interpreting graphic data. At the end of the ecology unit, I will use some of the multiple-choice questions in the film guide as a formal summative assessment.

HHMI resources give me not only great phenomenon-based activities to teach ecological concepts but also a variety of ways to assess my students’ understanding of these complex interactions.

Scott Sowell describes how he uses the coral bleaching animation and activity to teach his ecology students about the effects of global warming, while also integrating math and graphing skills into his lesson.

David Hong describes how he uses the short film The Guide with his AP® Environmental Science students to introduce the topic of conservation biology and challenges faced by nature reserves, such as Gorongosa National Park.

Amanda Briody describes two BioInteractive resources focused on Gorongosa National Park in Mozambique. She uses the short film The Guide to introduce students to the park and its scientists.