Tell Me a Story: Using BioInteractive Activities to Create Storylines

Imagine walking into a high school classroom to observe students working in groups while they figure out a problem. It’s the first day of the new unit, and the students have just watched a short video clip on an engaging phenomenon about tusklessness in elephants, where they’ve been asked to individually come up with questions about this phenomenon. They are now discussing their questions and categorizing them. Soon they will be exploring a data-based activity to figure out why elephant populations have changed. Students aren't encountering natural selection via a lecture about Darwin but instead are empowered to figure out what is going on on their own by looking at the data, without the teacher explaining it to them.

This student-driven discovery is the basis for storylines as a way to teach science.

A storyline is a sequence of lessons that has an anchoring phenomenon: something that makes the student notice and wonder and inspires their natural curiosity to ask questions about what may be causing this phenomenon. Maybe the phenomenon is about color variation in rock pocket mice, tusklessness in elephants, or why kelp is diminishing in Pacific Northwest ecosystems. Each lesson addresses a driving question that may be student-generated and that will help explain the anchoring phenomenon. Subsequent lessons are linked by a question that leads to the next lesson. This establishes coherence; each lesson connects back to the anchoring phenomenon so students feel like they are working to explain and answer their own questions. In a storyline, students should see each activity as helping to make progress toward figuring things out. 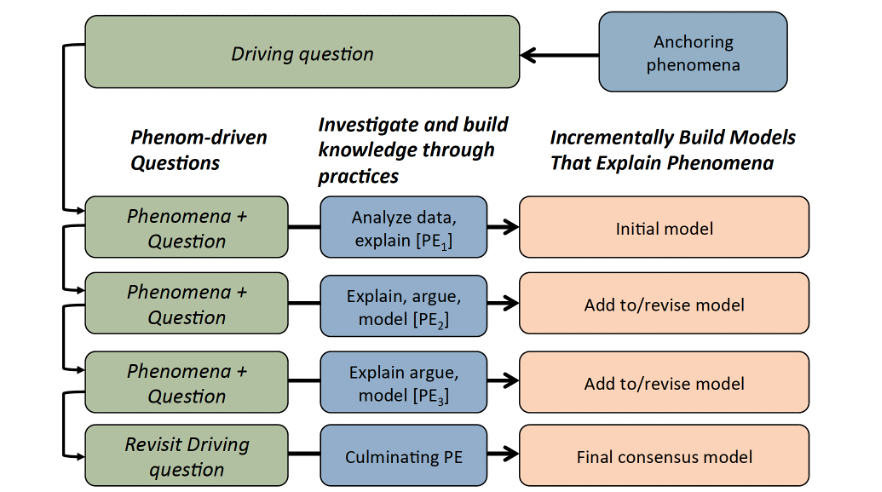 A diagram showing the overall structure of a storyline. Image adapted from Brian Reiser (2014).

What makes a storyline different from a lesson sequence or unit plan?
Traditionally, teachers have planned their courses around the order of chapters specified in a textbook, planning lessons with a test in mind at the end. After completing one unit and test, it’s on to the next chapter. But to students, these units are presented as disconnected ideas.

When implementing storylines in my biology classes, I look for a phenomenon that might require students to build science ideas (e.g., NGSS Disciplinary Core Ideas) from genetics, evolution, ecology, and cell/molecular biology all in one engaging and meaningful story. Students engaged in sense-making through storylines are focused on figuring out how the natural world works, not just learning a bucket of facts. Before I taught using storylines, I was often dismayed that, when it came time for the test on the unit, students didn’t seem to retain the material in the long term and, if presented with an application-type problem, had no idea how to approach it.

When I learned about storylines, I realized that I hadn’t been giving students the skills (practices) they needed to solve novel problems. As described in the Next Generation Science Standards (NGSS) “Using Phenomena” resource: “The point of using phenomena to drive instruction is to help students engage in practices to develop the knowledge necessary to explain or predict the phenomena. Therefore, the focus is not just on the phenomenon itself. It is the phenomenon plus the student-generated questions about the phenomenon that guides the learning and teaching. The practice of asking questions or identifying problems becomes a critical part of trying to figure something out.” Teaching through the lens of these practices has been more effective in the long run than just giving my students lots of content that they will forget quickly. I realized that students can be asked to think critically to make sense of the world, a skill they will carry with them when they leave my classroom. The focus becomes more about “figuring out” than “learning about.”

Creating a storyline on tuskless elephants

BioInteractive has always been at the forefront of producing high-quality, engaging, free lessons based on actual research. Many of the lesson suites can be put together into a storyline, such as those available via Storyline Builder. For example, the elephant tusklessness resources include lessons dealing with natural selection, population genetics, molecular biology, ecology, and animal behavior. I have used these resources for years in my evolution unit when teaching about natural selection.

Before I implemented storylines, I would typically lecture about Darwin to introduce the unit and pour all the facts about evolution into students’ heads. Then we would go on to activities to support those facts. I would show the whole Scientists at Work video Selection for Tuskless Elephants about Dr. Joyce Poole, who studies elephants in Gorongosa National Park in Mozambique. I’d then give students a worksheet or two to answer questions about how tusklessness was naturally selected for. Then I would check natural selection off my list and move on to the next chapter.

Since I’ve switched to using storylines, I now show the first part (up to 1:40) of the video to introduce the anchoring phenomenon. Students make observations about the group of elephants in the video; they eventually notice that some elephants have tusks and others don’t. BioInteractive has just published a new Phenomenal Image on tusked vs. tuskless elephants, “Mystery of the Missing Tusks,” which could also serve to introduce the anchoring phenomenon.

Naturally, students have questions about tuskless elephants, which captures the essence of the first science practice, Asking Questions. For example, does tusklessness have to do with elephants’ age or sex? What do elephants use their tusks for? What happens to elephants without tusks? Did some elephants lose their tusks? Groups of students work to categorize their questions, which highlights their understanding of the Cross Cutting Concept of “patterns.” Sometimes I just have them group questions that are similar to focus on a few ideas. Later in the year, I want them to reflect on which NGSS Science and Engineering Practices may help to answer their questions and under which Crosscutting Concepts their questions might be categorized, such as “cause and effect” or “patterns.” I have found that a good anchoring phenomenon elicits the questions that I anticipate and therefore I can choose activities to support student problem solving.

With this in mind, students next engage with the data-driven activity "Analyzing Data on Tuskless Elephants," which uses authentic data from research on elephants. By the end of the activity, students have discovered through the use of the “analyzing and interpreting data” practice that most tuskless elephants are found in populations that have been heavily poached. Students have figured this out on their own and have already answered some of their previously generated questions about the phenomenon. Now I can show the rest of the Selection for Tuskless Elephants video. Students learn that elephants are keystone species in Gorongosa National Park and for what purposes elephants use their tusks.

A linking question might be, “How do scientists count the numbers of different elephants?” To answer this, I show a clip from the video The Great Elephant Census and then have students do the activity “Modeling Animal Survey Methods.” Students use lentils to represent individual elephants and use the practice of “modeling” to show how animal populations are counted and how population size is estimated. A variation on this activity is to use different-colored lentils to represent tusked and tuskless elephants.

Students usually want to know how the poachers can be stopped from killing more elephants. This leads to the Click & Learn CSI Wildlife, in which simulated molecular biology tools are used to identify the origin of poached ivory. In Case 1, students learn about PCR and gel electrophoresis and use DNA evidence to match poached ivory samples to samples of ivory from known regions. Case 2 uses a simulation of wildlife forensics using STR alleles and Hardy-Weinberg calculations to determine the probability that a particular piece of ivory came from a certain region. In these activities, students are using computational thinking and analyzing and interpreting data.

If students have a question about how this information was gathered, this could be followed up with the Data Point activity “Using Genetic Evidence to Identify Ivory Poaching Hotspots,” which shows maps of how scientists used elephant dung samples to build profiles of elephant populations. These genetic studies were used to compare poached ivory samples to the profiled elephant populations and determine which population the ivory came from.

Once students have determined for themselves that tusklessness is selected for in elephant populations subject to poaching, I have them do Tasks II and III of the “Developing an Explanation for Tuskless Elephants” activity. In Task II, they construct a scientific explanation using the VIDA strategy. VIDA stands for Variation, Inheritance, Differential Survival and Reproduction, and Adaptation. This framework helps students summarize the evidence for any claims about a trait changing in response to natural selection in any species. In Task III, they write a Claim-Evidence-Reasoning (CER) response to provide argumentation for their explanation.

By the end of this storyline, students have used three-dimensional learning to figure out a scientific concept on their own. They have used all or almost all of the NGSS Science and Engineering Practices and Crosscutting Concepts, while working through multiple Disciplinary Core Ideas (e.g., genetics, cellular and molecular biology, ecology, and evolution).

In my experience using storylining, students are more engaged with the activities and come to understand the concepts much faster than when using a more traditional model. I act as a facilitator of their learning as opposed to delivering all of the information; the responsibility is therefore on students to use authentic data to make sense of the phenomenon. Students make their own connections between topics within the storyline and are able to apply what they learned in class to new topics. They are using problem-solving skills to conduct investigations and analyzing data at a higher level. I do see them struggling a great deal, since they’re used to being told exactly what they need to know rather than trying to figure it out for themselves. But this productive struggle is critical to creating strong, independent learners.

The overarching goal for all high school graduates is to have sufficient conceptual understanding of science to engage in public discussions on science-related issues and to be careful consumers of scientific and technical information. I have had to let go of the idea that I have to “cover” all of the topics in biology in a given course; I now know that it’s more important for students to figure out scientific ideas for themselves than to be told about them.

Reiser, B. (2014, April). Designing coherent storylines aligned with the NGSS for the K-12 classroom. NSELA Conference. Presentation in Boston, MA.

Kathy Van Hoeck taught high school biology for 24 years. Since retiring in 2017, she keeps busy consulting, writing curricula, and leading (and attending) professional development. Kathy loves traveling and spending time with family, especially at her cabin in the Northwoods of Wisconsin.

This article by professor Melissa Haswell sequences a four-week evolution module that minimizes lecture while teaching students to think like scientists.

In this Educator Voices article, hear from New Jersey educator Karen Lucci as she outlines how she utilizes our finch resources with her introductory biology students in constructing explanations about evolution by natural selection.

In this Educator Voices article, hear from Minnesota educator Dawn Norton about how her students explore the "story" of evolution by natural selection through a series of HHMI BioInteractive resources.