What would it be like to learn about birds — in a classroom that was a giant bird’s nest? A first-grade teacher at a district-wide STEM committee told me about how his students measured eggs and wrote stories about being baby birds, all while in a classroom that looked like a bird’s nest. His approach really changed my own thinking, especially when he described how engaged his students were practicing math skills and writing while completely immersed in a storyline about birds.

Storylining is a technique that builds upon the existing knowledge of the learner and places the teacher in the role of a facilitator rather than a distributor of content. Students create their own framework for learning with the guidance of questions from their teacher and, in this process, construct a story upon which to build their understanding. (Click the graphic below for a high-resolution version of the image.) 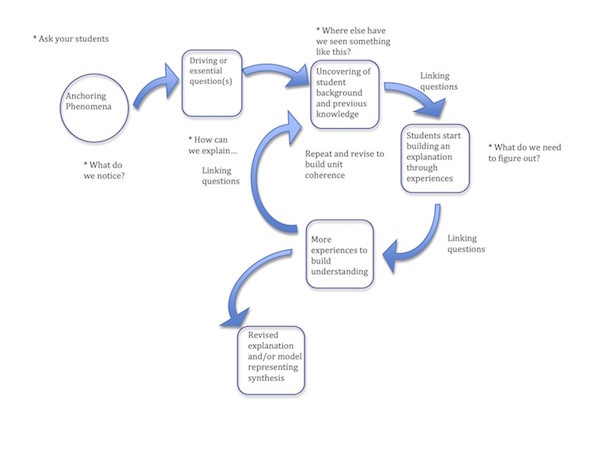 My experience with storylining, which initially was quite nerve-racking, has consistently produced student-generated questions leading right into the content that I planned to cover. This happens successfully when you have a sense for what your students know coming to your class or have a way to draw past experiences out of them to assist you as you guide them toward relevant content.

The first-grade teacher’s “bird’s nest” classroom got me thinking more critically about the ways this technique could be used in my high school AP® Biology classroom. Last spring, I took the plunge into a storylining process surrounding gene therapy and genetic medicine, using a wide variety of resources from HHMI BioInteractive.

I started the sequence with the short film Genes as Medicine. While watching the film, students drew a T-Chart in their notebooks with one column labeled “content I am familiar with” and the other “content that is new.” After watching, I asked them to take their completed charts to a class list on the front board. They all added to this list so we could determine a starting point for our learning.

As a class, we began talking about the “content that is new” column on the board, and one student asked a question about how viral vectors get healthy genes into cells. Many questions followed, and this set the stage for developing the rest of the storyline.

To develop background knowledge on viruses, we used “Virus Explorer.” This Click & Learn resource is a beautiful and informative introduction to a variety of viruses. I used the worksheet that goes along with the resource as a guide for my students to explore the content.

I then asked my students “What type of virus would make a good vector for gene therapy?” To answer this question, they formulated a claim from their research and explained their reasoning using evidence from the Click & Learn for that particular vector. Their resulting ClEvR (Claim, Evidence, Reasoning) response became the first summative assessment of the unit.

Now that they had a more solid understanding of viruses, my students were ready to explore gene expression. I used the “Central Dogma Card Activity” as a formative assessment, asking students to organize the cards and apply the appropriate vocabulary based on their previous study of protein synthesis. We then watched animations of transcription and translation. We took notes while watching the animations, practiced vocabulary, and ultimately built paper models to teach each other about eukaryotic gene expression.

I asked students to predict points during eukaryotic gene expression that would provide opportunities for gene therapy treatment interventions. We listed these ideas on a poster in the classroom and then used the “Central Dogma” Click & Learn to reinforce relevant concepts and vocabulary. Teams of students explored different genetic medicine disease applications and presented treatment interventions targeting that particular stage of gene expression to other groups. We went back to our predictions of where interventions might occur and found that medical interventions are actually used at many of the points where we predicted they might be effective.

Discussions of treatment intervention points led us into a conversation about the varied applications of CRISPR, a topic my students have been hearing a lot about in the news. I assigned the “CRISPR-Cas 9 Mechanisms and Applications” Click & Learn for homework, asking my students to use the “How it works” animation to make labeled drawings in their notebooks. The next day, in small groups, students watched the “How it’s used” videos and generated a list of three debatable questions based on the short interviews with scientists.

They then organized themselves into pairs for a silent debate based on one of the questions they generated. During a silent debate, students write a provocative question at the top of a piece of paper and then take opposing views on that question. They pass the paper back and forth, each writing a rebuttal to the comments of their classmate.

Later, students read an article about CRISPR and its applications. During a Socratic Seminar about what they’d read, students were excited by their new understanding of genetic medicine and its potential role in their lives. Again, I asked them to assess their own learning by producing a ClEvR response about the role of CRISPR in future genetic applications. Based on student responses during the silent debate and their ClEvR responses, we engaged in a study of how immune systems can overreact to gene therapy, which led us into our next storyline focused on cancer.

Although our first experience with storylining was initially quite nerve-racking, my students were excited by this new approach to learning. In the end-of-unit reflection, many students described how invested they were in understanding gene therapy, not only because the topic was of interest to them but also because they felt like drivers of their own learning.

Have you ever developed lessons following a storyline? What did you like and what would you change? Which resources do you use from BioInteractive to engage your students?

Come join a conversation about the use of storylines as a technique for increasing student learning.

Kathryn Fisher is a high school biology teacher, mother, and maker in Oregon City, OR. She spends summers with her family working in the garden, hiking, and exploring the outdoors. During the school year, she loves engaging her students in conversation about biology and helping them think about their learning in new and novel ways.

Sherry Annee describes how she uses the Bacterial Identification Virtual Lab to introduce the concepts of DNA sequencing, PCR, and BLAST database searches to her students.

Ann Brokaw describes how she uses the HIV life cycle animation in her three levels of high school biology classes, taking advantage of the animation’s strong curricular connections to multiple topics, including immunology and cell biology.

Jackie Washington describes how she uses the BioInteractive pedigree analysis activity, in conjunction with the Learning From Patients Holiday Lecture, to teach Mendelian genetics to her college students.