The public generally respects scientists and their work and appreciates the value of scientific discovery. However, discoveries that challenge beliefs, values, and other points of view can cause difficulties. Recent scientific literature, including the 2017 National Academy of Sciences report on “Communicating Science Effectively,” points to a growing gap in communication between scientists and the public.

In response, scientists and science educators should recognize that there is a tremendous need to engage with the general public through outreach to communicate their science and to increase public confidence in science. Science educators are already doing this by preparing their students to be informed citizens, and it makes sense to continue this engagement once students leave the classroom.

While one element of public engagement with science is informing people about a topic and raising awareness, another critical element is for the scientist to also learn about public perception of science. Assuming that your audience is somehow deficient and in need of correction rarely achieves this. As science educators, we are all well aware of the value of having active, student-centered classrooms. These same strategies also work with adult learners and can be effective at promoting dialogue between scientists and science educators, and the general public, which will encourage learning by both parties.

BioInteractive resources are developed for classroom use, but they can also be excellent tools for engaging the general public and stimulating dialogue. For example, I had the opportunity to give a presentation to the local chapter of the Daughters of the American Revolution. The group was interested in learning about DNA testing and how it is used in tracing ancestry, particularly in the context of genealogies. With the growing popularity of DNA testing services, the group was interested in learning about the science behind them.

While my initial temptation was to lecture on sequencing technology, the best approach was to treat this opportunity like any other active learning exercise in my courses. The primary objective was for the audience members to be able to explain how genetic markers are used to connect individuals to specific populations. To achieve this objective, they needed to be able to explain the amount of genetic differences between individuals, identify these differences as genetic markers and explain how certain markers would be shared among individuals with a common ancestry. Although this was not taking place in a classroom setting, I still wanted to assess whether the activity achieved the desired objectives by noting the variety and depth of the questions asked during the presentation.

Knowing that the audience members would have heterogenous backgrounds regarding their knowledge of human biology, it was important to select a resource that did not focus on details such as DNA sequences. The “Click & Learn” activity on “Using DNA to Trace Human Migration” from “Scanning Life’s Matrix: Genes, Proteins, and Small Molecules” turned out to be an excellent resource for accomplishing my objectives.

This activity provides a basic introduction to the level of genetic differences among humans and between humans and primates. Next, the activity relates those differences to “barcoding” and compares the genetic differences that could be used as genetic markers to colored squares. It then walks one through how the genetic markers can be used to trace human migration by illustrating how populations that diverge acquire new markers through mutations and recombination, which are shared among populations along the same migration pattern. This is a great way to introduce to the audience how genetic testing can identify the possible ancestry of an individual based on the presence of certain markers linked to a particular part of the world. 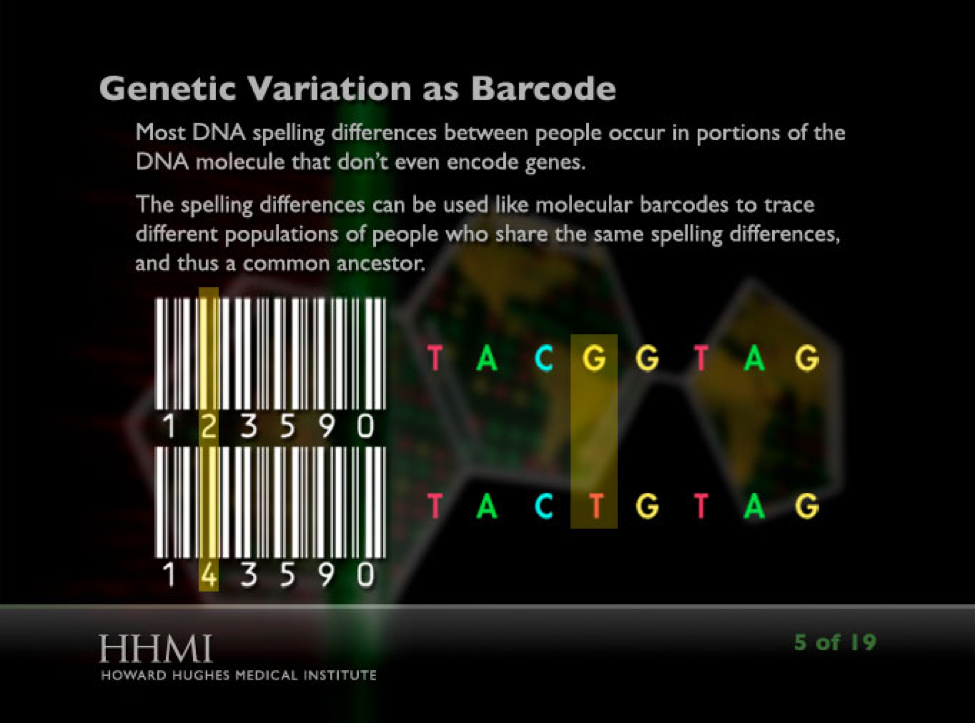 For the presentation to the group, I went through the first few slides to introduce the basic concepts of genetic markers. I then used a few of the accompanying worksheet questions to start the dialogue. We talked about the “spelling” differences used as genetic markers and made sure everyone had a clear understanding of the key concepts before moving on. Along the way, the group was engaged and asked pointed and thoughtful questions. This led to opportunities to address misconceptions and misunderstandings. 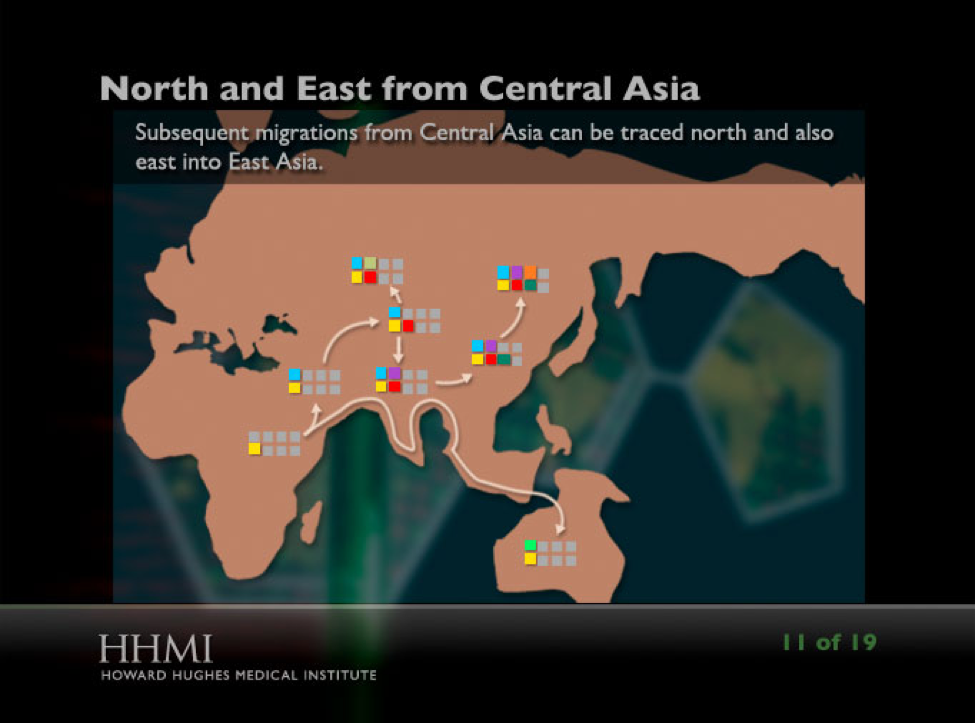 As we moved through the Click & Learn as a group, the audience members were asked to examine each illustration in small groups which enabled them to formulate and ask their own questions before delving into the explanation. When audience members used proper terminology such as “markers,” “mutations,” and “changes” in their discussion, it was clear they had picked up on the key concepts and were able to quickly recognize how some markers stayed the same while new markers were acquired.

As the audience became more comfortable with the topic, the dialogue became more interactive and raised questions such as “Is this why traits are common among certain populations?” The audience demonstrated that the learning objectives had been achieved through the depth and breadth of the questions raised and the use of appropriate terminology. On my part, I also found the concerns raised by the audience such as the ethics of sharing this information and its possible implications rewarding.

Meaningful public engagement with science should be a rewarding experience for both the scientist and the general public. Each should come away from the experience having learned something new and, hopefully, having gained a new appreciation for each other’s perspective.

Engaging resources such as the BioInteractive Click & Learn on “Using DNA to Trace Human Migration” can be an ideal starting point for rewarding dialogue. The active nature of the resources is ideal for allowing audiences to learn by doing, which enables them to begin to ask their own questions. The material is accessible to audiences with diverse backgrounds, which allows all participants to be engaged in the conversation in a comfortable and nonthreatening environment. I look forward to sharing more BioInteractive resources as part of my public engagement with science activities.

Want to use BioInteractive resources to help the public better understand science? Have questions for Dave? Come discuss this post on our Facebook group.

Dave Westenberg is an associate professor of biological sciences at Missouri University of Science and Technology. Since 1997, he has been on the faculty at Missouri S&T, where he teaches a variety of microbiology and genetics courses for undergraduate and graduate students and is engaged in community outreach and K-12 education. His research lab focuses on plant-microbe interactions in agriculture and bioremediation and also studies new antibacterial materials for medical applications. He enjoys mentoring students through high school science fair projects, undergraduate research projects, student design teams (International Genetically Engineered Machines - iGEM), and student organizations (Humans vs. Zombies club). He is also the Missouri S&T Faculty Athletics Representative and in his free time enjoys cheering on the amazing Miner student-athletes.

Perri Carr describes how she uses BioInteractive’s elephant resources to teach concepts ranging from biotechnology to genetics to ecology and conservation.

Explore what scientific ethics are and how they relate to science as a process with this article from Davenport University professor Melissa Haswell, in which she discusses how she developed a scientific ethics course.

Tim Guilfoyle describes how he uses the BioInteractive short film Some Animals Are More Equal than Others and a claim-evidence-reasoning activity to have his students examine Robert Paine's starfish exclusion experiment.