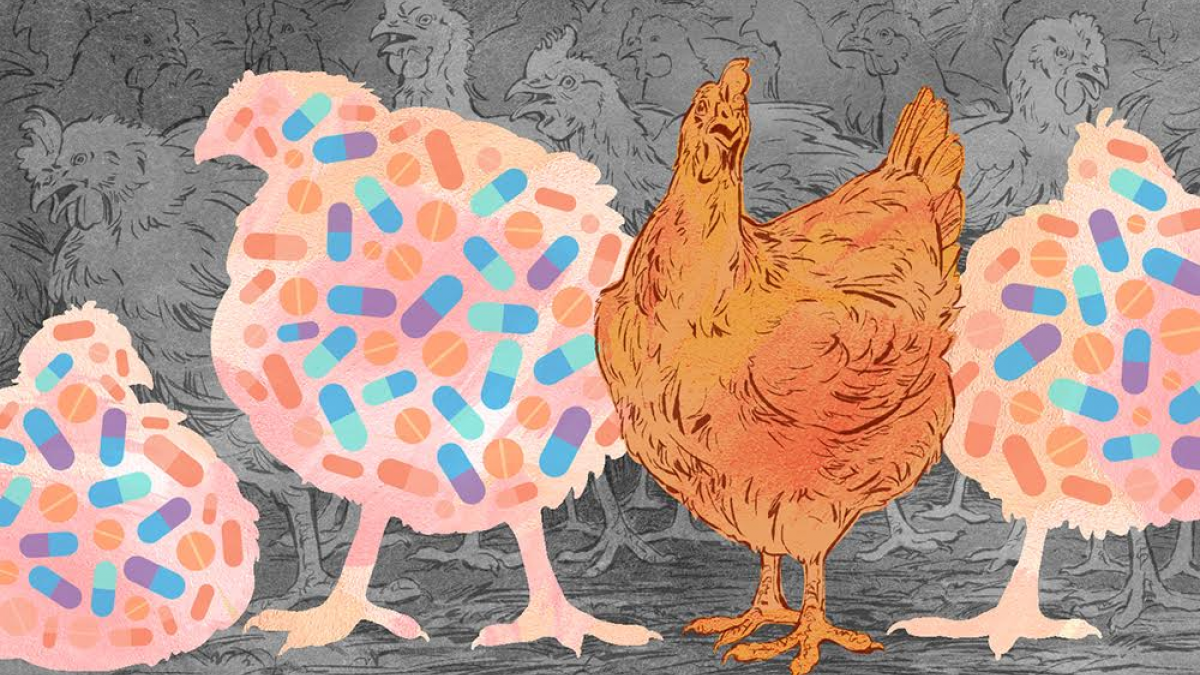 A Taste of Our Own Medicine

In January 2017, the United States Food and Drug Administration sharply curtailed use of antibiotics in livestock in hopes of addressing rising levels of antibiotic resistance in potentially disease-causing microbes.

This marks the beginning of what the FDA hopes will be a significant change in the way we use antibiotics in agriculture. In 2015, 34.3 million pounds of antibiotics were sold in the United States for use in livestock alone — more than quadruple the amount sold to human patients each year. Shutting down significant portions of such an enormous industry is not a move the FDA has made lightly — really, it’s been 40 years in the making.

Why is the FDA so concerned about antibiotic resistance? Do the pros of banning antibiotic use in livestock actually outweigh the cons? And how did antibiotics become so prevalent in livestock in the first place?

The battle against antibiotic resistance

When first identified by Alexander Fleming in 1928, the antibiotic penicillin was hailed as a miracle drug because it was able to stop infection-causing bacteria in its tracks. In the years following, penicillin was developed as a drug for both people and livestock, and infections that were once death sentences became treatable with a routine injections or pills. Human life expectancy rose; infant mortality decreased. While 300,000 Americans died of bacterial disease in 1930, fewer than 95,000 lives were lost to the same diseases in 1952 even though the population had grown by nearly 30%.

But there was a catch. Even as he accepted the Nobel Prize in Medicine in 1945, Fleming warned the rest of the world just how quickly resistance to antibiotics arose in bacteria. The emergence of antibiotic resistance, or the ability of a strain of bacteria to subvert the effects of a given drug, is almost an inevitability in a community of microbes — and once it starts, it can rapidly sweep through the entire bacterial population. And Fleming’s prediction has rung devastatingly true: strains of bacteria resistant to every drug we have available have been identified, many as soon as within a year after their initial discovery. The rapid appearance of resistance also stands in stark contrast to the ever-slowing rate of drug discovery: while a dozen different classes of antibiotics were introduced between 1935 and 1968, only two have been discovered since. Many of our first antibiotics were found by chance in nature, isolated from other bacteria that evolved over millennia of germ-on-germ warfare. Furthermore, the technical difficulties of designing and synthesizing new drugs in the lab, coupled with the long, rigorous process of safety testing and FDA approval in the U.S., have left our medicine cabinets bare of new antibiotics.

Tuberculosis, gonorrhea, and staph infections are only a few of the most infamous highly drug-resistant infectious disease still plaguing the world today. In many cases, patients with these diseases are turned away from hospitals because there are simply no drugs left to treat them. Over 700,000 people worldwide die each year as a direct result of antibiotic-resistant bacterial infections. And the rates are going up, with antibiotic resistance expected to cost the world at least 10 million lives and $8 trillion each year by 2050.

How does resistance arise and spread? As it turns out, it’s a numbers game. As bacterial populations grow in number, diversity arises: random mutations occur in the bacterial genetic code, and some members of the community are more equipped to handle stresses — like drugs — than others. When this population is treated with a drug, it will kill many bacteria — except the ones that have randomly evolved resistance.

So it’s perhaps no surprise that many scientists are alarmed by what they consider unnecessary use of antibiotics in our livestock. Many of the drugs we use to treat livestock closely or exactly resemble the antibiotics we use in people. By allowing these compounds in our food, soil, and water in any amount, we are increasing the prevalence of bacteria resistant to the very drugs we use to treat infections.

But since the 1950s, most of the livestock in the US has been continuously dosed with antibiotics at sub-therapeutic levels in their food and water. How did this practice begin — and is antibiotic use in livestock still warranted in any context?

Cleanliness is next to chubbiness

In the early days of antibiotics, drugs found their way into animal feed almost as a happy accident. Beginning in the 1940s, antibiotics were at first used in livestock therapeutically, to treat bacterial diseases as they are in humans. The drugs did the trick: farmers were able to keep their animals healthy and minimize the spread of disease-causing bacteria in their livestock and into the food supply. But the drugs also had a surprising and initially unintended side effect: the animals consuming them quickly began packing on pounds, despite eating the same amount of food.

More pounds meant more marketable meat — and, with the boom of antibiotic discovery in the 1950s, an enormous and affordable windfall for farmers. They quickly capitalized on the opportunity, feeding all animals, sick or healthy, sub-therapeutic doses of the growth-promoting drugs. Not only did this boost the animals’ weight gain, but it also acted as a prophylactic to keep the animals from getting sick in the first place. This allowed farmers to save money on expensive food and to keep the animals indoors in poorer, filthier, and more cramped conditions. So-called growth promoting antibiotics (GPAs) replaced pasture and feed, and meat hit the market shelves in tons. Within a few years, almost none of the antibiotics given to livestock were administered to treat illness, instead being doled out constantly in the hopes of preventing future infections and increasing yield.

What can explain this strange side effect of antibiotics? Most scientists believe the answer lies in the gut microbiota, the enormous population of bacteria and other microbes in the digestive tract that helps us digest food, ward off harmful pathogens, and produce necessary chemicals for bodily function. By simply preventing infections, antibiotics may be allowing the body to spend precious resources on growth rather than on the immune system. Additionally, antibiotics may be destroying populations of bacteria in the small intestine; these bacteria might actually compete with host cells for food, leaving more nutrients to be absorbed by the host in their absence. Other evidence suggests that bacteria produce chemicals that directly suppress growth. Finally, just as antibiotics can impact our own guts, animals treated with regular antibiotics tend to have intestines with very different architecture, which can alter nutrient uptake.

No matter what the explanation is, the effects are clear: heavy doses of antibiotics contribute to weight gain, and we’ve known it since the 1940s.

Right now, there are two big concerns with antibiotic overuse. The first is antibiotic resistance. Drug-resistant bacteria like MRSA are being served directly onto our dinner plates, either in the form of infected meat or from the crop fields fertilized with contaminated livestock feces. It’s for this reason that the FDA has decided that antibiotics may no longer be used for growth-promoting purposes. Their stance is “justified use”: therapeutics only. Don’t fix it if it ain’t broke — because who knows what else you might end up damaging in the process.

This move is not the first of its kind. The European Union banned use of antibiotics for growth promotion (but not disease prevention) in 2006 — with mixed results. Understandably, farmers are unhappy with the stricter regulations. Without antibiotics, they’re forced to rely on much more troublesome methods of sanitization and expand their factories to allow for more space and invest in more feed. And so many have found loopholes in the restrictions: it turns out it’s easy for farmers to purchase drugs under the guise of treatments instead of GPAs and reintroduce them into feed. This may seem deceitful (or just plain illegal) but the issue is certainly not black and white: illness in livestock is uncommon, and ridding animals of harmful bacteria protects not only our sheep, cows, and pigs, but also the billions of people who eat them.

In the United States, many have argued that these regulations will make meat production more costly, and that we are sacrificing pounds of meat that could instead feed hungry people. While some analyses have found these claims to be untrue, there’s no escaping the fact that costs will likely increase in the short term as farmers adjust.

But there is a second bitter pill to swallow. Those pesky side effects of weight gain? They could be happening in humans too.

Several studies have identified a possible link between antibiotic administration in infants and children and the development of obesity later in life. And while it is not possible to conduct the same definitive studies in humans that we do in mice, multiple groups of scientists have shown that giving young mice frequent doses of antibiotics leads to weight gain. And others have shown that removing certain populations of bacteria from the human stomach can actually increase blood levels of ghrelin, a hormone that increases appetite.

There is not yet scientific consensus on the link between antibiotics and obesity in humans — but scientists and doctors agree that it may be wise to use more caution as we continue to prescribe these drugs to children, given that the United States is one of the top consumers of antibiotics in the world.

So what’s the solution to this pervasive problem? Scientists are hard at work developing what many are calling “post-antibiotic era” drugs. Until then, our need for antibiotics will not disappear overnight, so measured use of antibiotics only when necessary is probably the way to go. In the meantime, though, it will take more work to define the many roles antibiotics now play from prescription to plate.

I Contain Multitudes is a series of videos, educational materials, and articles produced by HHMI and inspired by a New York Times bestselling book by Ed Yong. It explores the fascinating powers of the microbiome: the world of bacteria, fungi, and other microbes that live on and within other organisms, including ourselves.

Science News
The Search for the World’s Simplest Animal

For centuries, scientists have obsessed over a primordial blob that can shape-shift, clone itself, and live indefinitely.

Nearly 40 years after it was found by a monk in a Chinese cave, a fossilized chunk of jawbone has been revealed as coming from a mysterious relative of the Neanderthals.

For the first time, scientists have shown that hummingbirds can sing and hear in pitches beyond the known range of other birds, according to research published Friday in the journal Science Advances.