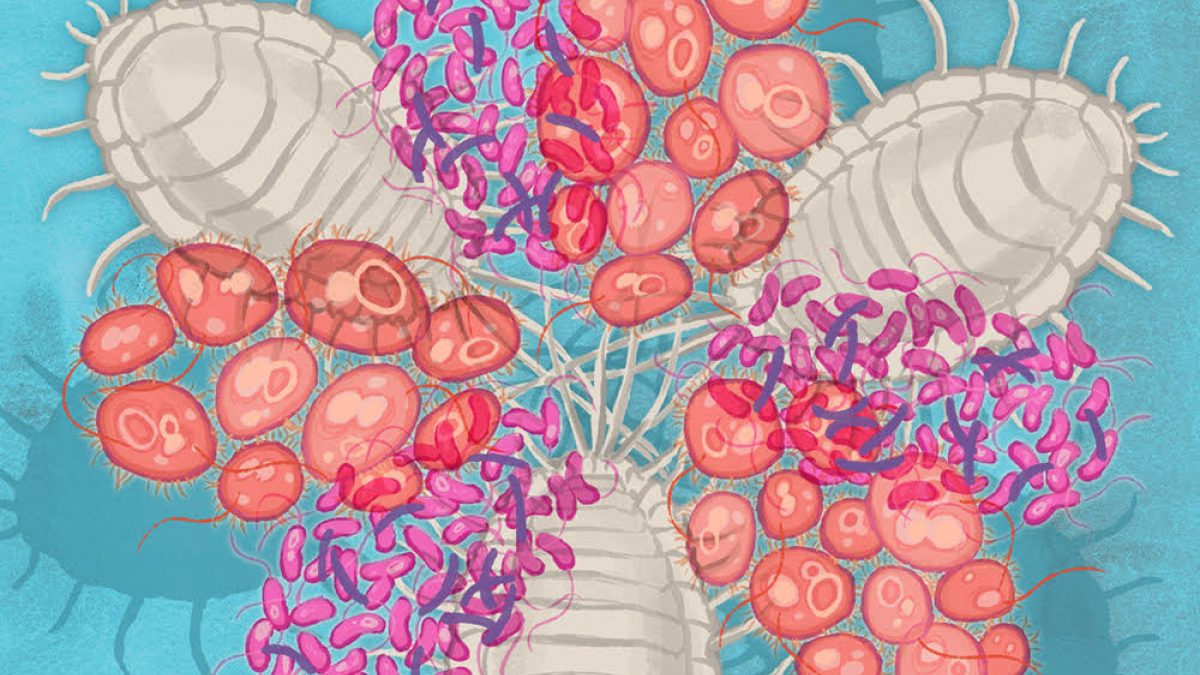 Have you heard of tropical panic grass, aka dichanthelium lanuginosum? Probably not. But if you have visited Yellowstone National Park in the American West, you may have seen its wispy fronds tufting out of the scorching mud of the park’s geyser basins, geothermal springs or mud pots. The grass’ name offers a hint to its feverish temperament: it is one of very few plants that can survive in the park’s blazing geothermal soils.

The answer to why lies in the concept of symbiosis.

Okay, What Is “Symbiosis”?

In the late 1870s, German scientists Albert Frank and Heinrich Anton de Bary introduced the term “symbiosis” to biology. From the Greek for “together” and “living,” it was meant to describe a newly identified kind of relationship between organisms. Lichens, scientists had discovered, are actually composed of a fungus and an alga in an intimate and mutually beneficial alliance. The alga uses sunlight to make food for the fungus, while the fungus offers minerals, water, and shelter. It turned out to be a revolutionary finding.

In the more than a century since, symbioses have been found to play an essential role in the development and survival of almost every organism. Humans, animals, plants, coral and insects all depend heavily on microbes, which, in turn, depend on their hosts. Consider the gut bacteria that support human and animal health, the algae that power coral reefs, or the mitochondria that make our cells run. It turns out that these give-and-take relationships with the microbiome are essential to life on earth. They are so universal and paramount, in fact, that earlier this year, some scientists called for a wholesale remapping of Darwin’s Tree of Life to take them into account.

To understand how elaborately entangled some symbioses with microbes can get, it helps to take a look at the so-called Russian doll symbionts. Much like the brightly colored folk art figurines for which they are named, the organisms in these partnerships fit snugly one inside the other in multi-species arrangements also sometimes known as nested endosymbioses. An insect or plant host will contain a fungus, virus or bacterium, which in turn engulfs another fungus, virus or bacterium, and the three cooperate to ensure their co-survival. These complimentary hitchhikers may work together to allow the host to metabolize certain hard-to-digest foods, such as vertebrate blood or plant sap or wood, or they may help the host defend against aggressors, or provide some survival advantage in extreme environments.

A Grass That Can Survive Near-Boiling Temperatures?

Take those panic grasses that love the sizzling soil in Yellowstone Park. Scientists have long known that endophytic fungi grow inside the grass and that together the grass and the fungi are able to resist temperatures of over 149 degrees fahrenheit. Alone, neither organism can take the heat: they can’t survive more than 100 degrees when separated. But in 2006, scientists funded by the NIH identified a virus that lives inside that fungus. What had seemed like a lifelong marriage between two partners was in fact a kind of polygamy. When the virus was eliminated, both the fungus and the grass lost their heat resistance. When the virus was reintroduced, the heat resistance returned. The precise part that the virus plays in this relationship is not fully understood, but researchers believe that osmoprotectants, such as trehalose, glycine betaine, and taurine, which help organisms survive extreme fluid imbalances, may be involved. A pigment called melanin, which is said to enhance the stress tolerance of rock-inhabiting fungi, and heat shock proteins may also play a role.

Sometimes, the partners in these triplet arrangements, though they technically can’t live without one another, have commitment issues. Most mealybugs, for example, contain bacteria nested within other bacteria that cooperate to manufacture certain essential nutrients. For example, the host and its inner residents each contain one or more of the nine genes required to manufacture an essential amino acid called phenylalanine, without which the mealybug could not survive on its typical nutrient-poor diet. Some researchers have speculated that the co-symbionts must transport metabolites between them to complete synthesis of the amino acid. And yet, what specific bacteria partner together with the mealybugs has shifted over time and across species. While the outer bacterium — a bug called Tremblaya — tends to stay constant, the identity of the inner one is highly variable. (Though always from a single lineage known as Sodalis.) Scientists know this because many mealybugs not only depend upon the DNA of their current residents — they also contain the DNA of bacteria that no longer reside inside of them — the stolen DNA helps them make nutrients that its current residents can’t. But how precisely this swapping in and out of the inner bacteria and its DNA happens is not yet understood.

While some of the partners in triplet arrangements colonize their hosts via the environment or become integrated into host DNA — as we saw with the mealybugs — others are transmitted socially, from one host to the next, or divide along with the host cell. The last two means are used by termites, whose gut symbionts — amoeba-like protists — in turn, contain their own bacterial symbionts. Together, the bacteria and the protists work to allow the termite to digest wood. Although most gut protists are lost every time a termite molts — which occurs three times as it matures — the protists are restocked during transfer of food or fluids between members of the termite colony. (Termites and other social insects commonly engage in the exchange of regurgitated liquid food, a process called trophylaxis.) The bacterial endosymbionts, meanwhile, divide every time the termites’ protists divide, reproducing themselves.

What Does It all Mean?

So how did these Russian Doll arrangements evolve? That’s a question scientists are still puzzling out, but at least for the termite and its symbionts, the process seems to have occurred while the species was still developing into its current form. In a 2007 paper published in Molecular Ecology an international team of scientists described a process of cospeciation among the termite, protist and bacteria based on genetic analysis. It was the first study of co-speciation in a multi-species symbiosis.

Multi-species symbioses may turn out to be more common than we realize. Just last year, researchers discovered that most lichens contain two fungi, not one. It’s a fascinating insight, given that lichens launched the very study of such mutually beneficial alliances.

I Contain Multitudes is a series of videos, educational materials, and articles produced by HHMI and inspired by a New York Times bestselling book by Ed Yong. It explores the fascinating powers of the microbiome: the world of bacteria, fungi, and other microbes that live on and within other organisms, including ourselves.

Thanks to the compounds used to protect precious flowers, antifungal resistance is here—and it could be just as dangerous to humans as antibiotic resistance.

Preserved mummy bacteria can tell us a lot about the evolution of pathogens and antibiotic resistance.

Why your microbiome is considered an ‘essential organ’