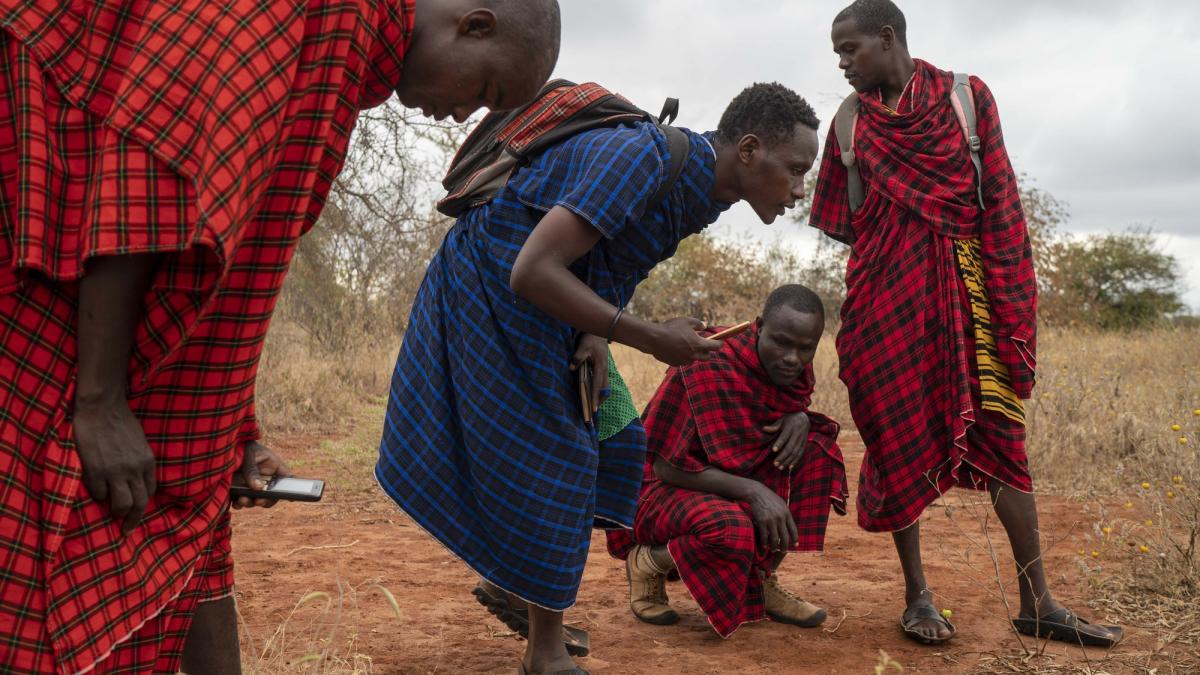 By: Christina Larson
Source
Associated Press
Series
What Can Be Saved?
Topics
EcologyEnvironmental Science
Share This

LOIBOR SIRET, Tanzania (AP) — Saitoti Petro scans a dirt road in northern Tanzania for recent signs of the top predator on the African savannah. “If you see a lion,” he warns, “stop and look it straight in the eyes — you must never run.”

Petro points to a fresh track in the dirt, a paw print measuring nearly the length of a ballpoint pen. He walks along a few more yards reading tracks the way an archaeologist might decipher hieroglyphics, gleaning meaning from the smudges in the dust. A large male passed here within the past two hours, he says. “Here he’s walking slowly, then you see his claws come out in the tracks. Perhaps he’s running after prey, or from something else.”

The tall, slender 29-year-old is marching with four other young men who belong to a pastoralist people called the Maasai. Beneath the folds of his thick cloak, he carries a sharpened machete. Only a few years ago, men of Petro’s age would most likely have been stalking lions to hunt them — often, to avenge cattle that the big cats had eaten.

But as Petro explains, the problem now is that there are too few lions, not too many. “It will be shameful if we kill them all,” he says. “It will be a big loss if our future children never see lions.”

And so he’s joined an effort to protect lions, by safeguarding domestic animals on which they might prey.

Petro is one of more than 50 lion monitors from communities on the Maasai Steppe who walk daily patrol routes to help shepherds shield their cattle in pasture, with support and training from a small, Tanzanian nonprofit called African People and Wildlife. Over the past decade, this group has also helped more than a thousand extended households to build secure modern corrals made of living acacia trees and chain-link fence to protect their livestock at night.

This kind of intervention is, in a way, a grand experiment. The survival of lions — and many other threatened savannah species, from cheetahs to giraffes to elephants — likely depends on finding a way for people, livestock and wild beasts to continue to use these lands together, on the plains where the earliest humans walked upright through tall grass.

Across Africa, the number of lions has dropped by more than 40 percent in two decades, according to data released in 2015 by the International Union for Conservation of Nature, putting lions on the list of species scientists consider “vulnerable” to extinction. They have disappeared from 94 percent of the lands they used to roam in Africa, what researchers call their “historic range.”

The biggest reason for lion’s retreat is that their former grasslands are being converted into cropland and cities. Losing habitat is the top risk to wildlife in Africa and globally. But on open savannahs where lions still roam, poaching for body parts and revenge killings are the next most significant threats.

Lions are respected as worthy adversaries in Maasai culture. Anyone who harms more than nine is said to be cursed. But avenging the death of a prize cow wins respect, like dueling to avenge a lost family member.

These retaliatory killings have become more deadly in recent years, as many herdsmen have switched from spearing individual lions to leaving out poisoned carcasses, which can decimate a pride of lions, along with other animals that might feed on tainted meat.

But what if the triggering conflicts could be prevented? “Our elders killed and almost finished off the lions,” Petro says. “Unless we have new education, they will be extinct.”

And so he hikes the steppe, looking to teach people how to live more peaceably alongside large predators.

On a July morning, he stops suddenly and points toward a tree-lined ravine. The tracks he’s been following have veered off the road, so he thinks the lion moved toward a stream in the gorge. The footprints must be recent because there are not yet bits of grass strewn on top.

As his team walks toward the gulley, they hear cow bells jingling. “We should go and check if anyone is coming this way,” says Petro. “We need to warn them.” They soon find two young shepherds — pre-teen boys — sitting under an acacia tree, playing with small yellow fruit like balls in the dirt. Their two dozen cattle are meandering toward the ravine.

Petro kneels to greet the boys, then advises them about the lion. The men help the boys to turn their herd around, with a high whistle the cows recognize, sending them grazing in a safer direction. Petro knows most of the families near here; later, he will make a home visit.

In most corners of the planet, humans and big predators don’t easily co-exist. When forests and savannahs are converted to farms and cities, the land ceases to be suitable habitat for most large animals. And predators lingering on the edge of cultivated lands are often demonized, or exterminated — witness the heated debates about allowing gray wolves on the margins of Yellowstone and the French Pyrenees.

But on the elevated plains of northern Tanzania, pastoralists have long lived alongside wildlife: grazing their cows, goats and sheep on the same broad savannahs where zebras, buffalo and giraffe munch grass and leaves — and where lions, leopards and hyenas stalk these wild beasts.

It’s one of the few places left on Earth where coexistence may still be possible, but it’s a precarious balance. And what happens here in Tanzania will help determine the fate of the species; the country is home to a more than a third of the roughly 22,500 remaining African lions, according to data from researchers at the University of Oxford.

There’s some evidence that recent steps taken to mitigate conflict are working.

In 2005, the village of Loibor Siret (population 3,000) on the Maasai steppe saw about three predator attacks on livestock each month. In 2017, the number had declined to about one a month. The biggest change in that interval was that about 90 village households built reinforced corrals, which are much more effective than the older barriers of tangled thorn bushes at keeping predators away from livestock. 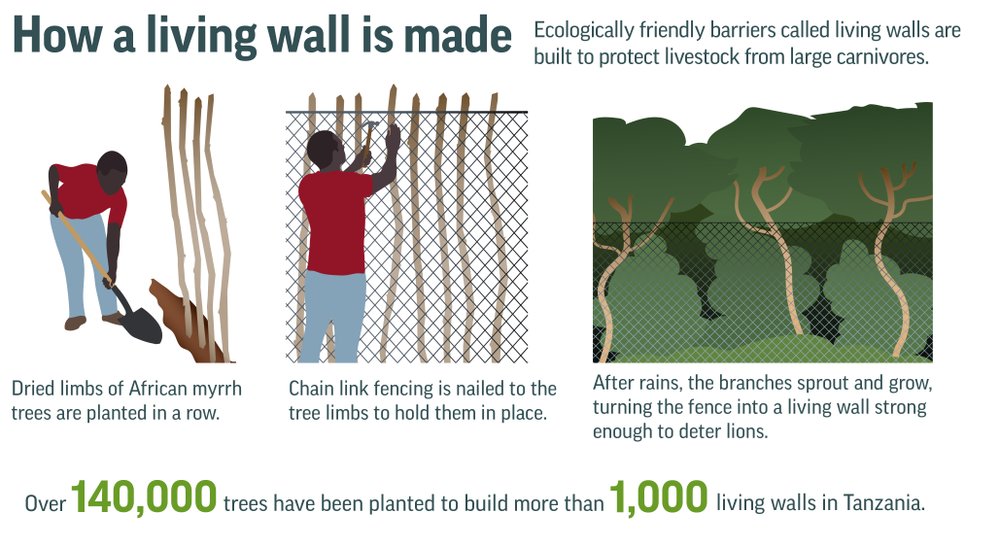 Although protecting animals in pasture is a trickier challenge, the lion monitors helped to defuse 14 situations in 2017 that might have led to lion hunts, according to records collected by African People and Wildlife.

While the number of lion hunts in the region is dropping, they do still sometimes happen. In July, one of the field patrols submitted a report about a recent revenge killing, including a photograph of a dead lion with its four paws and tail removed — an old ritual for collecting talismans.

Despite such setbacks, the local lion population is beginning to bounce back.

Within a study area monitored by the nonprofit Tarangire Lion Project, the monthly count of lions hit a low of around 120 lions in fall 2011 — down from about 220 lions in 2004. But the population started to recover in 2012, reaching more than 160 lions by 2015.

“Once you make lions safe, their numbers can recover quickly,” because lions reproduce rapidly, says Laly Lichtenfeld, an ecologist and co-founder of African People and Wildlife.

Says Craig Packer, a biologist and founder of the Lion Center at the University of Minnesota, who is not involved in the project: “These conflict-mitigation efforts clearly help lions, although there’s always the question of whether they’re going to last 20 or 50 years with a growing human population.”

Wildlife refuges are sometimes not a sufficient answer — at least for species that require large ranges.

Within the boundaries of Tanzania’s Tarangire National Park, lions sleep on open river banks and dangle from tree branches — they are, after all, cats — often ignoring the squadrons of open-top safari tour vehicles passing by. Here, they are mostly safe. But the protected area of the park is only a portion of the land that these lions and their prey depend upon. Large migratory animals range widely, and on the parched savannahs of eastern Africa, they mostly follow the rains.

The zebras and wildebeests that spend the dry months inside Tarangire National Park move outside the park during the wet winter months, where they munch on more nutritious grass and give birth to most of their calves. And lions, leopards and cheetah trail behind them, roaming widely on the Maasai steppe.

“The animals in Tarangire spend so much of the year outside the park, you could never put a fence around it — a fence that blocked migration in and out of the park would kill it,” says Packer.

Increasingly scientists are realizing that lands outside national parks must also be considered in conservation strategies. In a study published in March in the journal Science, researchers linked the access and condition of lands surrounding Tanzania’s famous Serengeti-Mara ecosystem to the health of wildlife inside the park. Overgrazing and fire suppression on the edge of the park, for instance, “squeezed” the animals into a smaller area within it, they found.

“The current way of just thinking about the borders of protected areas isn’t working,” says Michiel Veldhuis, an ecologist at University of Leiden in the Netherlands and a study co-author. When devising conservation strategies, he says, “we need to think about how to include people living next to protected areas.”

Those people can be skeptical. Some people in nearby villages say they aren’t happy about Petro’s efforts.

“We don’t want to hear lions roar at night,” says Neema Loshiro, a 60-year-old woman selling handmade jewelry spread out on a cloth on the street of Loibor Siret. The only wildlife she wants nearby are giraffes and impalas because “they’re pretty and don’t attack people or eat crops.”

Still, attitudes are evolving. Petro Lengima Lorkuta, Saitoti Petro’s 69-year-old father, killed his first lion when he was 25, hurling a spear after the cat attacked his largest bull. In those days, he says, “If you killed a lion it showed that you were a strong warrior.”

Since his extended family moved into a new ranch home and erected a reinforced corral four years ago, he says they have not lost any livestock to predators. “The modern fence is very helpful,” he says.

“Now I love to see lions,” just not too near his home — and he supports his son’s efforts to educate neighbors about avoiding predator conflicts.

Petro still rises each day at dawn to take the cattle to pasture, as his ancestors have done for generations. But the culture is changing in many ways: Rather than allowing his father to arrange his marriages, as most young Maasai men do, Petro wooed his two brides.

“We expect the growing generation to get more education than us,” he says, “and therefore to know the importance of wild animals.”

More than 50 million Americans are conducting an unwitting experiment on a vast scale. I joined them from my Manhattan high-rise.