The world continues to increase the amount of heat-trapping carbon dioxide it pumps into the air, but it’s not rising as fast as in the previous couple years.

Led by big jumps from China and India, the world is projected to spew 40.57 billion tons (36.8 billion metric tons) of carbon dioxide into the air in 2019. That’s up nearly 255 million tons (231 million metric tons) from 2018, according to two scientific studies released Tuesday. The studies by Global Carbon Project, a group of international scientists who track emissions, show a 0.6% increase from last year.

In previous years, global carbon dioxide emissions grew by 2.1% and 1.5% after a few years in the mid 2010s when global emissions barely rose, according to the studies in Environmental Research Letters. Carbon dioxide from the burning of coal, oil and gas has caused 1.8 degrees of warming (1 degree Celsius) since pre-industrial times and world leaders are meeting in Madrid to try to limit warming to another 1.8 degrees from now.

“Emissions grew more slowly than last year but we still set a global record. It’s hard to be upbeat about that,” said study co-author Rob Jackson, a Stanford University climate scientist. “The U.S. National Academy of Sciences sounded the alarm on carbon and climate 40 years ago. Since then, global carbon dioxide emissions have doubled, and the world is hurtling towards catastrophic climate change.”

The 2019 estimate is based on data through the first nine to ten months of the year, with a few national estimates based only on six months of data, said co-author Glen Peters, a climate scientist in Norway. Past projections have proven pretty accurate, he said.

That means every second this year people put 2.57 million pounds of carbon dioxide in Earth’s atmosphere. That’s the equivalent weight of two Airbus A380s, the world’s largest passenger airliner, going into the air every second. 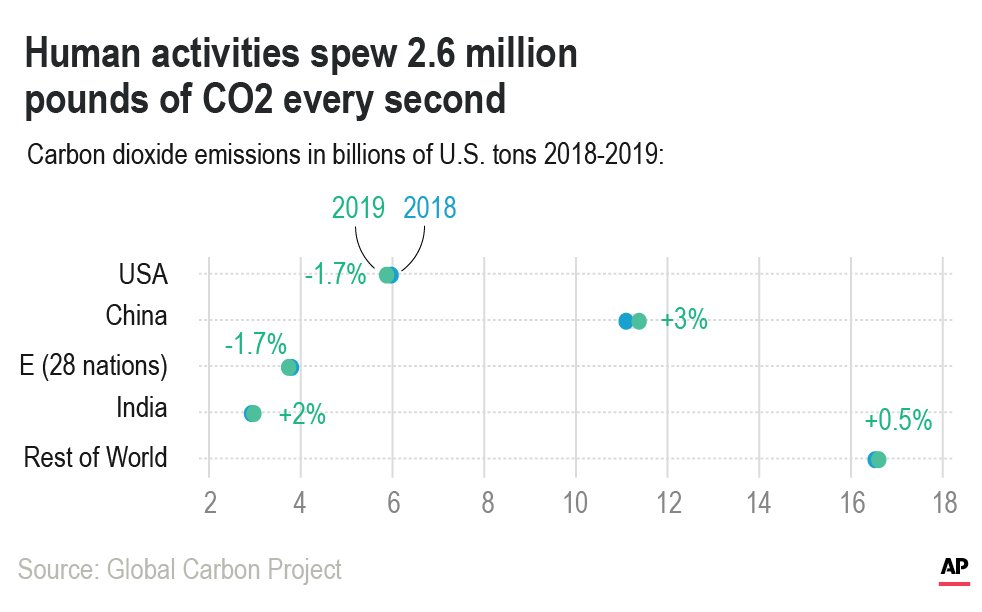 “Generally, I think this is bad news. Not terrible news, but bad news,” said Cornell University climate scientist Natalie Mahowald, who wasn’t part of the report. “A stronger switch from coal to solar or wind needs to happen to reach low climate targets.”

Led by 10% drops in both the United States and Europe, carbon pollution from coal dropped worldwide nearly 1% but increased 2.6% from cleaner natural gas, according to the studies. Coal still is the No. 1 source of man-made carbon pollution putting 16 billion tons (14.6 billion metric tons) of carbon dioxide in the air this year, followed by oil and then gas. Coal generally emits 76% more carbon dioxide than natural gas to produce the same amount of energy, according to the U.S. Energy Information Administration.

“I don’t think we have completely seen the end of coal yet, but it is certainly in the death throes,” Peters said. “Though, I would imagine a slow and protracted decline of coal because of the young infrastructure in Asia.”

But with coal dropping or even just plateauing, it is now apparent that the world is not quite on the worst-case scenario carbon emissions path of the four charted by the UN’s Intergovernmental Panel on Climate Change, Peters said. But the next two highest emission scenarios, which the world is closer to, are not “pleasant worlds to live in,” he said.

Princeton University climate scientist Michael Oppenheimer, who wasn’t part of the study, called the numbers grim: “Stepping back and looking at 30 years of data, there is nothing at all that reveals any reason to be optimistic that the world is about to turn the corner on reducing carbon dioxide emissions.”

The United States, which is in the early part of a year-long process of pulling out of the 2015 Paris climate agreement, has reduced its carbon dioxide pollution by 9.7% between 2000 and 2018, Jackson calculated. Critics of the Paris agreement said the U.S. is the world leader in reducing emissions, but Jackson’s numbers show 11 other nations have had bigger percentage cutbacks this century.

From 2000 to 2018, the United Kingdom has cut its carbon pollution by about one-third, Greece and Italy cut their emissions by more than 28%. At the same time, China’s carbon pollution has tripled and India’s has increased by 157%.

“The numbers show that the U.S. is not leading in terms of overall emissions reductions and this proves that we could be doing better,” said University of Michigan environment dean Jonathan Overpeck. “This highlights that more, not less, U.S. international leadership is urgently needed. I’m still hopeful we can turn this all around... If we don’t, the planet is cooked.” 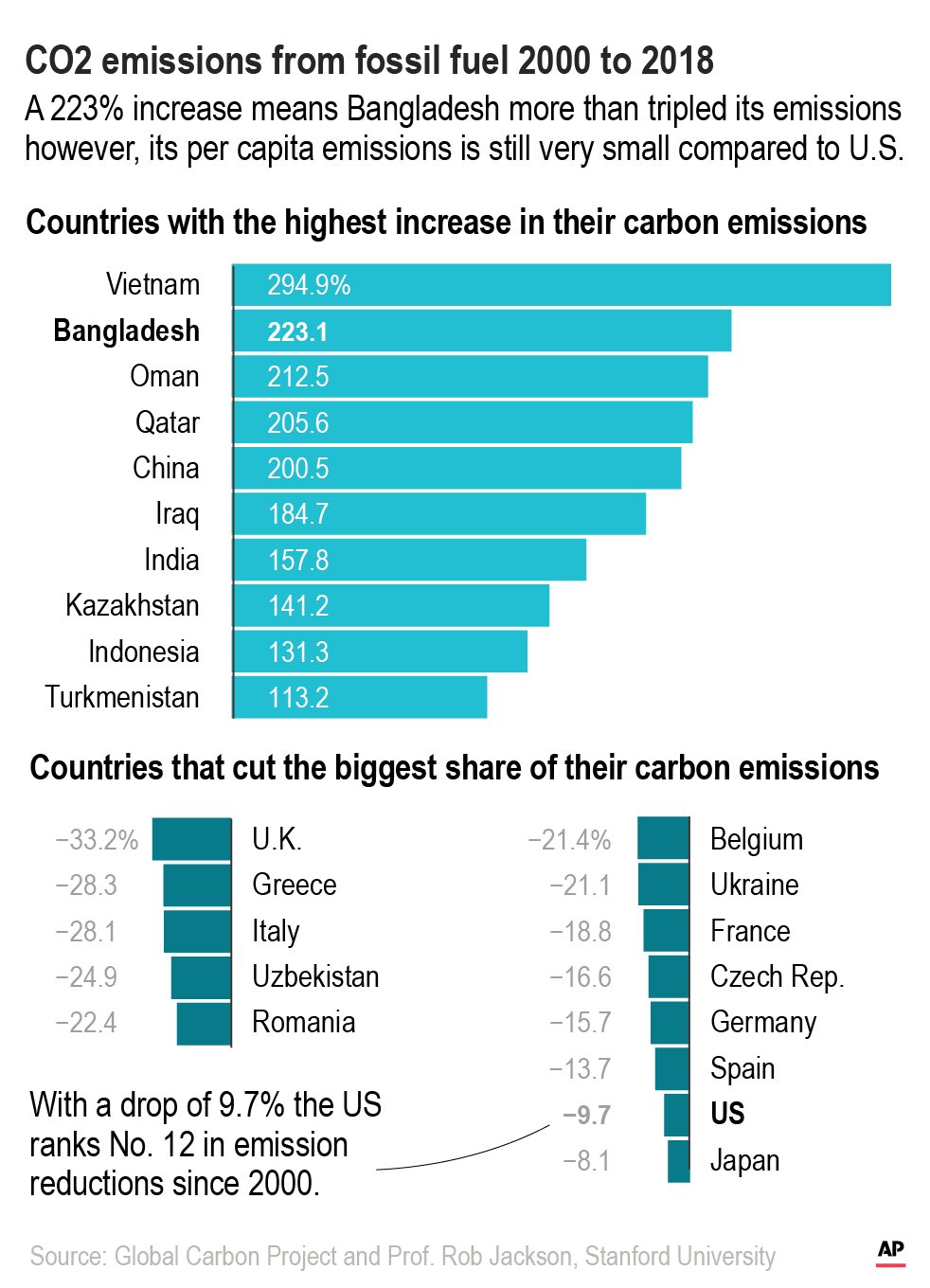