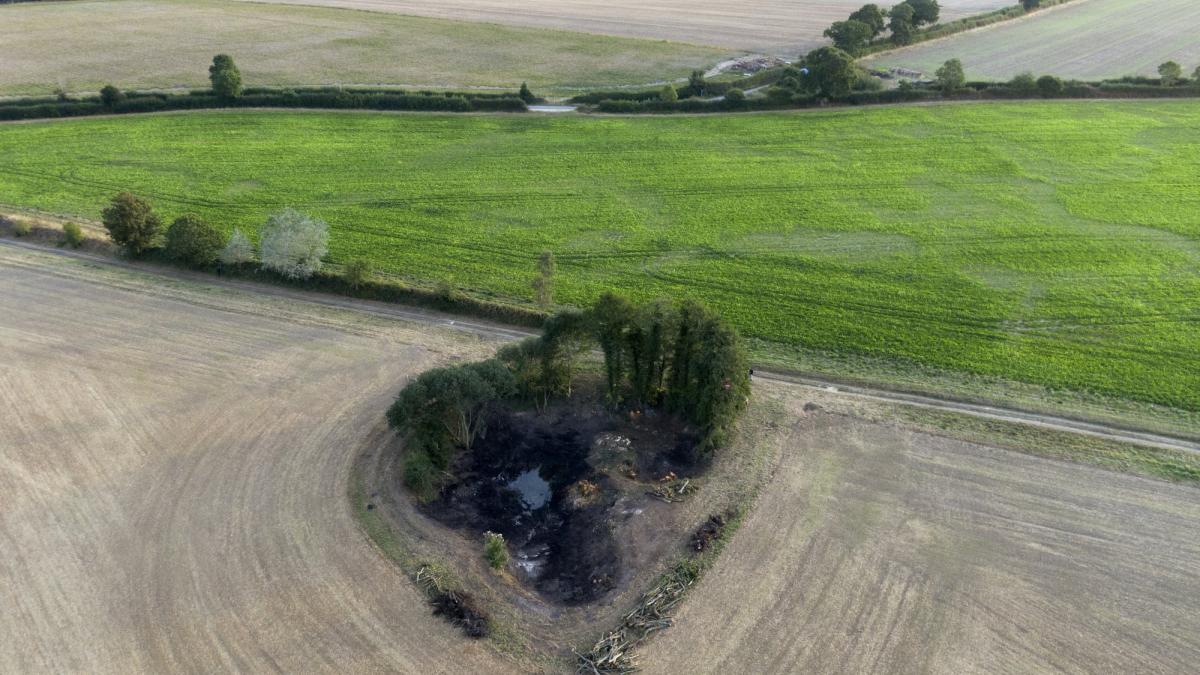 Bringing the world's buried wetlands back from the dead

By: Matthew Brown and James Brooks
Source
Associated Press
Series
What Can Be Saved?
Topics
EcologyEnvironmental Science
Share This

HINDOLVESTON, England (AP) — The ghosts are all around the gently rolling farmlands of eastern England. But you have to know where to look.

These are not the kind of phantoms that scare or haunt — they are ghost ponds. Over the years, landowners buried them, filling in wetlands so they had more land for planting crops and other needs, or let ponds fade away with neglect. Along with those ponds, they erased entire ecosystems — and contributed to the decline of wetlands worldwide.

The result: an array of environmental calamities, ranging from rising floods to species hurtling toward extinction.

There are some who are trying to reclaim these lost waterbodies. In the wetlands of eastern England, a motley team of farmers, university researchers and conservationists is digging into the region’s barley and wheat fields to turn back the clock. They seek out patches of muddy earth that hint at lost ponds lurking beneath.

Using chain saws, an excavator and plenty of sweat, the team takes just a few hours to resurrect one dying pond near Hindolveston, a thousand-year-old village not far from the North Sea. They fell trees and shrubs, then start digging until reaching their goal: an ancient pond bottom that once supported insects, aquatic plants and the birds and animals that fed on them.

“As soon as they get water and light, they just spring to life,” says Nick Anema, a farmer in nearby Dereham who has restored seven ponds on his property. “You’ve got frogs and toads and newts, all the insects like mayflies, dragonflies, damselflies. ... You can’t really beat a pond.”

But the battle for the wetlands is a struggle. While efforts are underway to stem losses and regain some of what’s been lost, wetlands around the world continue to be filled in and plowed over.

Almost 90% of the world’s wetlands disappeared over the past three centuries, according to the Ramsar Convention, an organization formed around a 1971 treaty to protect wetlands. The loss rate has accelerated since the 1970s, with wetlands now disappearing three times faster than the world’s forests, the group says.

Every type of naturally occurring wetland has suffered — from ponds, freshwater swamps and coastal marshes, to fens, bogs and other peatlands.

The consequences can be profound:

—Roughly 5,000 wetland-dependent species threatened with extinction, including mammals, birds and amphibians, according to Ramsar.

—Fewer natural storage areas to hold back torrential rains means more severe floods in many parts of the world, including the U.S. heartland, as seen this summer.

—Draining wetlands, such as in Indonesia to make way for palm oil plantations, can release huge amounts of the greenhouse gas carbon dioxide, a major contributor to climate change.

Wetlands in northern China, the central U.S., northern Africa, India and the Middle East already have been depleted by the pumping of underground aquifers for agriculture.

“We now know the value of wetlands, and we know with increasing precision how many wetlands we’re losing. The next step is for the governments to act,” says Royal Gardner, director of the Institute for Biodiversity Law and Policy at Stetson University in Florida.

A few hours of heavy rain in North Dakota are all it takes to transform the dry, cracked earth of the U.S. prairie into thousands upon thousands of pocket-sized wetlands.

The rain pools in shallow depressions known as prairie potholes and quickly flushes out insects from beneath the soil.

Each pothole becomes a haven for a pair of ducks. Two blue-winged teals dabble in one pothole that’s sprung back to life with the rains. Nearby, a mallard hen keeps her head down to the water, stuffing herself with insects and vegetation to store up the energy she’ll need raise her next brood, while a male, or drake, watches vigilantly for any predators. On the next pothole, two more ducks, then two more and so on, all the way to the horizon.

Each spring and fall bring an even greater influx of waterfowl: clouds of migrating snow geese that descend en masse, lingering for a few days on the larger water bodies as they pass between breeding grounds in Canada and their winter refuges to the south.

But to farmers, these wetlands carved into the earth by glaciers some 10,000 years ago can be an adversary. The muddy holes bog down tractors and rot newly planted seeds and they can kill young crops, leaving patches of lifeless stalks.

Some farmers steer around them, planting seeds in swirling patterns to avoid wet areas often smaller in size than the hulking combines that appear at harvest time. Other wetlands are removed, often to make way for corn.

“It’s the crop of the younger generation and I’ve got to think ahead,” says farmer Barton Schott, who drained several wetlands this summer to improve the corn fields he plans to pass onto one of his sons.

Schott gestured at fields dotted with “nuisance wetlands” as he navigated his truck down a bumpy dirt road.

“We have to make bushels for you guys. I just want to make the land better,” he says.

Despite their mind-boggling numbers — several million potholes are spread across a region that covers portions of five states and three Canadian provinces— these wetlands are steadily blinking out. One by one, they’re being drained or plowed under.

These changes already have rolled through large parts of the prairie pothole region with a profound impact: Iowa has lost 99% of its wetlands and neighboring Minnesota has lost 95%, according to U.S. officials. The Dakotas and Montana have seen smaller declines.

Hundreds of millions of dollars have been spent trying to reverse or at least halt the losses.

That includes payments to North Dakota ranchers like Cody and Deanna Sands in Ellendale. Aided by the U.S. Fish and Wildlife Service, the Sands have plugged a series of man-made ditches on their pastures. That lets the water pool, helps grow grass for their cows and creates nesting areas for grassland and water birds.

Now they worry less about having enough rain and spend more time marketing their beef. “Restoring the wetlands made it a better piece,” Deanna Sands says as she wades through knee-high grass.

Just across the road is a reminder that others feel differently — a huge farm where fields have been drained to increase plantable acreage.

The region’s future, experts say, comes down to a numbers game, one that so far is tilting against the potholes as wetlands are sacrificed to feed demand for the corn-based fuel ethanol.

“We’re losing more habitat than we’re gaining,” U.S. Fish and Wildlife Service biologist Jon Beyer says. “The small, shallow wetlands attract the birds, and those are the ones at highest risk.”

Only human-made wetlands buck the trend toward global decline. Rice paddies, reservoirs and agricultural stock ponds all increased in acreage since the 1970s, according to Ramsar.

Schott, a third-generation farmer in the small community of Kulm, North Dakota, recently installed networks of perforated pipes beneath some of his fields to drain off the standing water. The water will get pumped into a nearby pond, making each acre drained “as productive as we can get it.”

Under federal regulations, he must offset the losses. He’s doing it somewhat reluctantly at a site about a mile away, installing a berm across a low area in one of his fields to create a small pond.

Schott, other farmers and their political allies in Congress want wetlands less than an acre in size — such as the three that he recently drained — to be exempted from the offset requirement. For now, if he doesn’t build the pond, he stands to lose his federally subsidized farm insurance and be ineligible for other government assistance.

The guiding principle is to have “no net loss” of U.S. wetlands. A similar tactic has been adopted in China, home to about 10% of the globe’s wetlands. Yet in both nations, scientists are concerned that the approach papers over significant differences between natural wetlands and those created by humans.

A group of researchers at the Chinese Academy of Sciences raised similar concerns in a September study, warning that statistics showing a slight increase in China’s total wetlands acreage between 2000 and 2015 obscured what really happened.

A significant portion of the increase came from the construction of dams that turned areas with many small wetlands into large reservoirs, the researchers found. The combined area covered by natural marshes decreased by almost 3,000 square miles (7,600 square kilometers) during the same period.

“People brag about the fact that there’s been no net loss. But what they’ve done is destroy natural wetlands and created artificial ones,” says Stuart Pimm, a Duke University professor who worked with the Chinese researchers. “It makes it look like you’re doing no harm when the reality is very different.”

Since the start of the 20th century, 75% of the United Kingdom’s ponds have been lost.

The initial drive to restore wetlands in East Anglia was guided by a Norfolk farmer, Richard Waddingham, who began protecting his ponds at a time when his neighbors still were filling theirs in, says Carl Sayer, a researcher at University College London who worked closely with Waddingham.

Waddingham drew inspiration from a pair of U.S. bird biologists from Cornell University whose work centered on the importance of wetlands to breeding ducks.

Nick Anema describes how his view of farming differs markedly from his father’s, who regarded the natural world as an obstacle to overcome.

For Anema, farming and preservation are inextricably linked. Farm too intensively and it degrades the soil. Cultivate all the way up to the property line and there’s no room for flowers that draw bees and insects to pollinate his crops.

He’d been leaving the “shelterbelts” that ring his crops untouched for years when in 2013 he saw an advertisement seeking farmers who would be willing to have ghost ponds on their property excavated as part of a research project.

He suspected a low point in one of this fields fit the description of a ghost pond and a check of old maps confirmed it. By the time the excavation wrapped up, water already was pooling at the bottom.

After ghost ponds are dug out, seeds from long-buried water plants come to life, including in one case a pond on Anema’s farm that had been filled in an estimated 150 years ago. And as the plants come back, so do the insects that depend on them, followed by fish and birds that eat the insects.

“We didn’t know what we would find in these holes in the ground until we started digging,” Sayer says. “They’ve done just what we hoped. They’re wonderful, healthy, vibrant ponds.”

Interactive Media
The Anthropocene: Human Impact on the Environment